Sometimes a user with performance issues will proudly present me with a traceroute and point to a particular hop in the network and accuse it of being the problem because of high latency on the link. About 1 time in 1000 they are correct and the link is totally saturated. The other 999 times, well, let me explain. 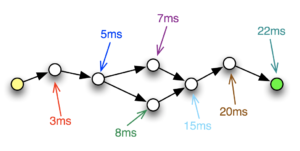 Here’s a typical traceroute I might be sent by a user (IPs and hostnames are altered to protect the innocent):

Look! the user cries, The link from atl-edge to ga-core is clearly all messed up because the latency goes from 20ms to 106ms!

Oh No It Doesn’t

Isn’t it amazing that the link in question apparently adds 90ms of latency, yet the link between hops 6 and 7 (the jump from east coast USA to the United Kingdom) appears to show no latency increase at all? In fact, isn’t it odd that the latency for every hop from 3 onwards is about the same?

I know that many people reading this will already know why this is, but for those who do not (and there’s no shame in that), this is indicative of there being an MPLS network in the path, and the MPLS Provider Edge (PE) is the router at hop 2.

Remember that one of the benefits of MPLS networks is that the network core (the Provider, or P routers) doesn’t have to know anything about the routes at the edge. The two things the P routers need to know are 1) where all the other MPLS-capable routers are (usually via OSPF or IS-IS) and 2) where to forward incoming MPLS frames based on the incoming labels. They are relatively dumb switches, and this which allows them to move traffic around faster than a native IP router could. So what’s the problem? 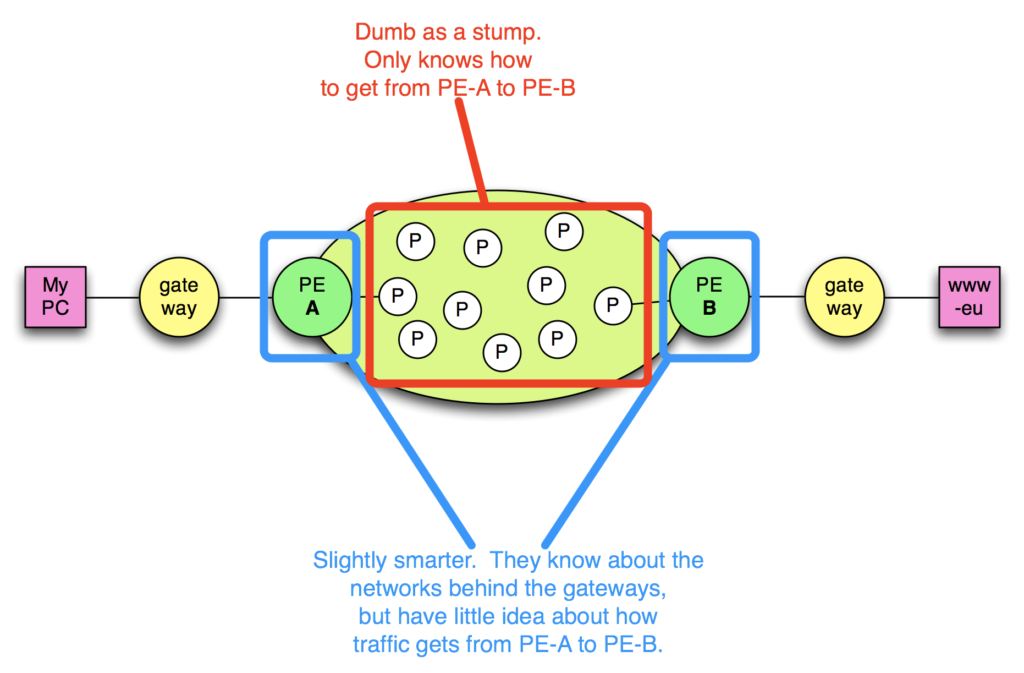 Traceroute relies on sending packets with an incrementing TTL; when the TTL expires, the router on which it expires will usually send back an ICMP message to the sender warning that the TTL expired in transit, and that’s how traceroute finds out about each hop in the network. Looking at the MPLS diagram above, what happens when the TTL expires on a P router? The P routers have no knowledge of the edge networks, so how could it route an ICMP packet back to a source it doesn’t know about? MPLS labels are one-way to the destination and there’s no return path included, so the P router does the only thing it can: it snags the outgoing label it was going to use and creates a new MPLS frame containing the ICMP TTL Expired message, and this frame gets switched all the way to the destination PE router (PE-B in this case).

In other words, any ICMP TTL Expired messages generated within the MPLS network actually flow to the far side of the MPLS network and then back again, which is why they all have a similar TTL, and why in this example all thes TTLs are large (because in this case they would have to cross from US to UK then from the UK to US in order to get back to my PC):

If you’ve not seen this before it can be very confusing. As a result I’ve seen time wasted on troubleshooting links which actually have no problems, all thanks to traceroute.

5 Comments on Traceroute Lies! A Typical Misinterpretation Of Output