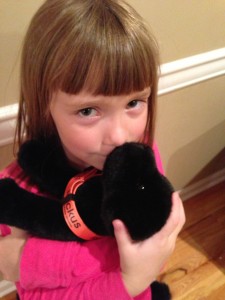 A surprise inclusion (in a good way) in Networking Field Day 5 was Ruckus Wireless, recognizable for their logo – a barking dog:

Why a surprise? Well, there’s a separate Wireless Field Day event, so having a wireless manufacturer at a Networking Field Day is a first I believe. I very much appreciated them taking the time to talk to us wired packet-movers, and I found the presentations and the tour fascinating. I am not a wireless guy (beyond my home network), so it’s interesting to see how one vendor is approaching the challenges of wireless networking.

After NFD5, Ruckus were sweet enough to send me an access point (ZoneFlex AP7982) and a controller (Zone Director ZD1100) to try out. This is the first post in what will I’m sure end up being a series talking about this hardware. Early signs are good – but let’s rewind slightly and take the hardware out of the box.

I figured that the logical place to start would be with the Zone Director, so that when I connected the AP it would be managed immediately. This turned out to be very simple in Windows – connect the ZD1100 to the network and power it up. Very shortly thereafter, it shows up as a device in the Windows Network:

It really is that easy – just double click on the ZoneDirector and it launches your default browser to an initial setup page: 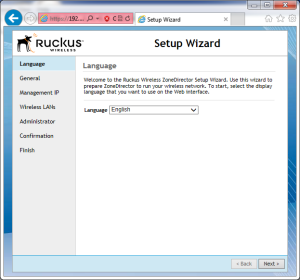 I gave the Zone Director a name, set up a fixed management IP (rather than its initial DHCP address), and chose not to enable Mesh since I only have the one AP. Continuing from there brought me to the admin Dashboard: 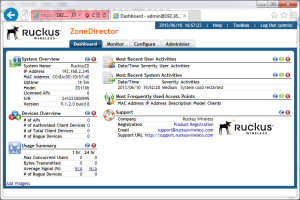 Lots of handy information in one place. So, since the Zone Director seems to be running, I plugged in the AP and let it boot. It quickly found the Zone Director and attempted to register (and it was permitted), but I was cut short because the version of software on the Zone Director didn’t support the AP7982 so it refused to manage it, as noted in the Most Recent System Activities section of the dashboard: 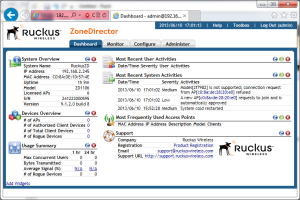 The Zone Director was running version 9.1.2.0 build 8. The latest code for the ZD1100 was 9.6, but that had been withdrawn (just for the ZD1100) due to reported upgrade issues. I contacted Ruckus Wireless support to get hold of newer software. Support responded quickly and provided me with download links for the software plus detailed directions on the upgrade path. Specifically they advised that the recommended path from my build (9.1.2.0.8) to the latest (9.5.1.0.50) should be achieved through three upgrade steps, as follows:

I grabbed the code and started upgrading. Performing the firmware upgrades was easy – choose a file (which is /immediately/ uploaded to the ZD with no confirmation prompt, by the way, but thankfully doesn’t actually try to install it until you tell it), backup the configuration when prompted to do so, and click Upgrade. Any connected APs get upgraded at the same time (and will drop off the network briefly during that process). In my case this was not a problem since my AP wouldn’t connect to begin with! Progress is shown in the web browser: 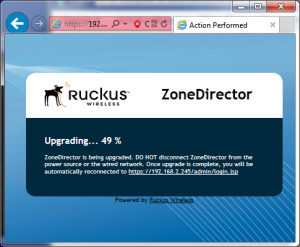 The status LED on the ZD1100 flashes orange while the upgrade is taking place, and after about 10 minutes the Zone Director was accessible again, and running the new code. I repeated this process two more times, and I was successfully running 9.5 (confirmed by the logs, too):

So then I turned the AP back on, it was automatically accepted by the Zone Director, and was ready to be configured. I should note that this automatic acceptance is the default, but the ZD should really be configured to require manual approval in a production environment.

The Configuration tab offers quite a few options:

The System settings include the IP information I set up previously, so at this point I was primarily interested in setting up a WLAN so I could connect to the AP. For a basic WLAN there’s not much to configure beyond the SSID, authentication type and passphrase: 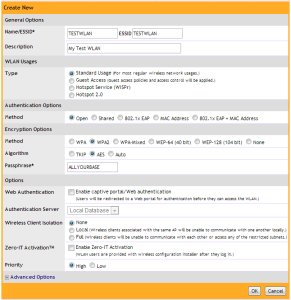 Hiding very quietly at the bottom of this form is a [+] Advanced Options selection. Clicking through opens up quite a few more options – click through if you want to see them: 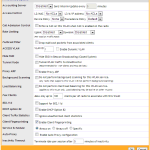 With the default settings, that’s enough for the WLAN to be activated on the AP. Since the controller is intended to manage multiple APs, there’s a more complex system at work to ensure that the right WLANs exist on the right APs. When an AP is being managed by the controller, it can be made a member of an Access Point Group. Each Access Point Group can be configured to deploy the WLANS defined in a particular WLAN Group. Thankfully, out of the box, new APs (like the AP7982) join the Default Access Point Group, and my new WLAN gets assigned to the System Default WLAN Group and, as you can probably guess, the Default Access Point Group is configured to use the System Default WLAN Group. Thus everything comes up immediately. Confused yet? 😉 The point is, you can get yourself up and running without needing to understand all of that.

If I exclude the time taken to perform the software upgrades, I had a WLAN up and running within about 10 minutes of unboxing the controller and AP.

Ruckus offers a handy iOS app called SpeedFlex that can be pointed at either the AP or the Controller to do a download/upload speed test. You don’t have to be connected to a Ruckus AP for this to work, but the target needs to be able to talk to the SpeedFlex app, which the Ruckus produts can do. For the sake of a rough and ready test, I ran SpeedFlex first to the AP then to the Controller through the Ruckus AP, and then through one of my existing Linksys E2500 wireless routers. It’s a little unfair on the Cisco to add another switched hop, but hey… So, without delving into the relative capabilities of each AP, the results were fairly straightforward:

I know, it’s not scientific, and it’s an iPhone 5 which is almost certainly a limiting factor in the Ruckus test. Mind you, since the AP7982 is more than twice the price of the Linksys, the improved performance over the Linksys should be expected. As was pointed out on Twitter, 50+ Mbps isn’t bad for a $40 AP.

In this post I’ve got far enough to bring up a WLAN, and confirm that it’s reasonably fast. In a forthcoming post, I’ll look a little more closely at the Controller. And beyond that I really have to talk about the antenna technology, because it’s quite fascinating the way the FlexZone APs work – quite differently to most others out there.

Ruckus was a paid presenter at Networking Field Day 5, and while I received no compensation for my attendance at this event, my travel, accommodation and meals were provided. I was explicitly not required or obligated to blog, tweet, or otherwise write about or endorse the sponsors, but if I choose to do so I am free to give my honest opinions about the vendors and their products, whether positive or negative. Ruckus provided me with an AP7982 and a ZD1100 as reviewed in this post, as well as a small black stuffed dog toy (modeled in the picture at the top of this article) and a name plate made out of a wifi antenna. 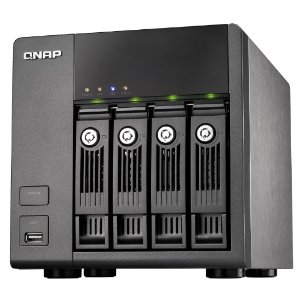