In my final post on Cisco’s Data Center Network Manager (DCNM), I’m taking a look at the deployment capabilities and templating features which allow configuration to be deployed automatically to multiple devices. In its simplest case, this might be used to set a new local username / password on all devices in the fabric, but in theory it can be used for much more. 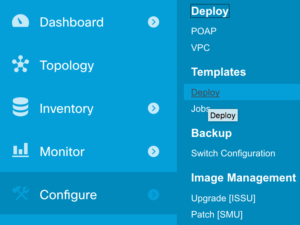 Let’s get one thing straight right out of the gate: this ain’t no Jinja2 templating system. While DCNM’s templates support the use of variables and some basic loop and conditional structures, the syntax is fairly limited and the only real-time interaction with the device during the execution of the template amounts to a variable containing the output of the last command issued. There are also very few system variables provided to tell you what’s going on. For example I couldn’t find a variable containing the name of the current device; I had to issue a hostname command and evaluate the response in order to confirm which device I was connecting to. That said, with a little creativity and a lot of patience, it’s possible to develop scripts which do useful things to the fabric.

One minor irritation I have with Fabricpath is that while it’s easy to build a large layer 2 Ethernet switching fabric, it’s not configured centrally like many of the newer SDN or large virtual-chassis technologies. As a result, performing what should be a simple task – adding a VLAN – turns into a tedious process of adding the same configuration to every single switch in the fabric. My test fabric has just 18 switches in it, but that’s quite enough repetition to be dangerous, and it’s easy to miss a device when configuring manually. Consequently, I’ll use the Add VLAN task as an example, and look at ways to use DCNM to automate the task to the point where the user simply has to enter a VLAN number and a description, and DCNM will do the rest automatically.

The basic process to run a template is:

Sounds simple, so let’s look at the structure of a template in DCNM land.

The header information is created automatically by filling in text boxes and checkboxes within the web interface, so it requires minimal effort. For the rest of the template, the framework is provided, but beyond that the content is entered manually.

A variable is something which may change each time the script is run, so it is requested from the user when the script is chosen to run. An example of a variable would be a VLAN id for a script which creates a new VLAN in the fabric; the user enters the VLAN id, and the script goes off and creates it.

At its simplest, variable definition is a type and a variable name. For example, the following code will prompt the user for VLAN_ID_RANGE:

integerRange is a built-in data type which allows for, well, a range of integers to be entered, e.g. 5-10,15,17. Other variable types include integer, boolean, string, ipV4Address and more. On its own, this variable definition doesn’t provide much guidance to the user as to what they should enter, so it’s possible to add a Description as well:

That’s an improvement over just the variable name, but the VLAN_ID_RANGE looks a bit ugly, so a display name can be defined as well:

Other basic validation can be added to the input fields too, so for an integer field it would be possible to define a valid range of values thus:

More complex validation may have to be performed manually however. For example, when requesting a VLAN name, not only is the length important, but the name also cannot contain spaces. This can be accomplished using something like this, which leverages the conditionals in the templating language:

The templates work similarly to a server-side include for HTML; any output to the page is considered to be a command to be issued to the switches. In this case, the output all begins with ! which is considered to be a comment by Cisco devices, so even if the user ignores the warning being shown on screen as part of the configuration, it won’t cause any harm if deployed. Helpfully, DCNM shows a preview of the calculated configuration (plus a rather confusing representation of any configuration that must resolve at run-time) before choosing to start deployment, so a warning like this will be obvious on the preview page. Here is an example where I enter 50 for the VLAN ID (which is outside the valid range) and specify a VLAN name containing one or more spaces:

Going back a page and changing the VLAN to a valid integer (500 in this case) shows this for the preview:

Note from the configuration that if the user continues with the deployment, VLAN 500 will be created as requested but it will not be given a name.

In my example fabric, I also know that when creating a new VLAN I will need to add it automatically to the port-channel uplinks on my edge switches which connect to the routers. I want to be able to select the entire fabric when creating the new VLAN, but I also need special configuration for those two devices. My solution was to use the device names. The edge switch hostnames contain the text fabricedge, so I can use that to identify which switches need the additional configuration. As noted earlier, however, I will have to obtain the hostname for myself because it’s not passed to the script as a system variable. The built-in variable $$LAST_CMD_RESPONSE$$ contains, unsurprisingly, the last response received from the switch:

Thus the configuration to add the new vlan to the trunks on the fabric edge switches will only show up if, at runtime, the response to show hostname includes the text fabricedge.

With a little input validation and some basic logic, I now have a template which I can use to create a new VLAN across the entire fabric, and trunk it to the routers connected to the fabric edge, all with a few clicks.

It’s not possible to create template without a populated variables section. My solution to that is fairly simple:

This satisfies the parser sufficiently to allow the script to run without further interference.

At the very least it might be nice to have HOSTNAME as a built-in variable.

Don’t bother, there isn’t any. At least, not based on this page: 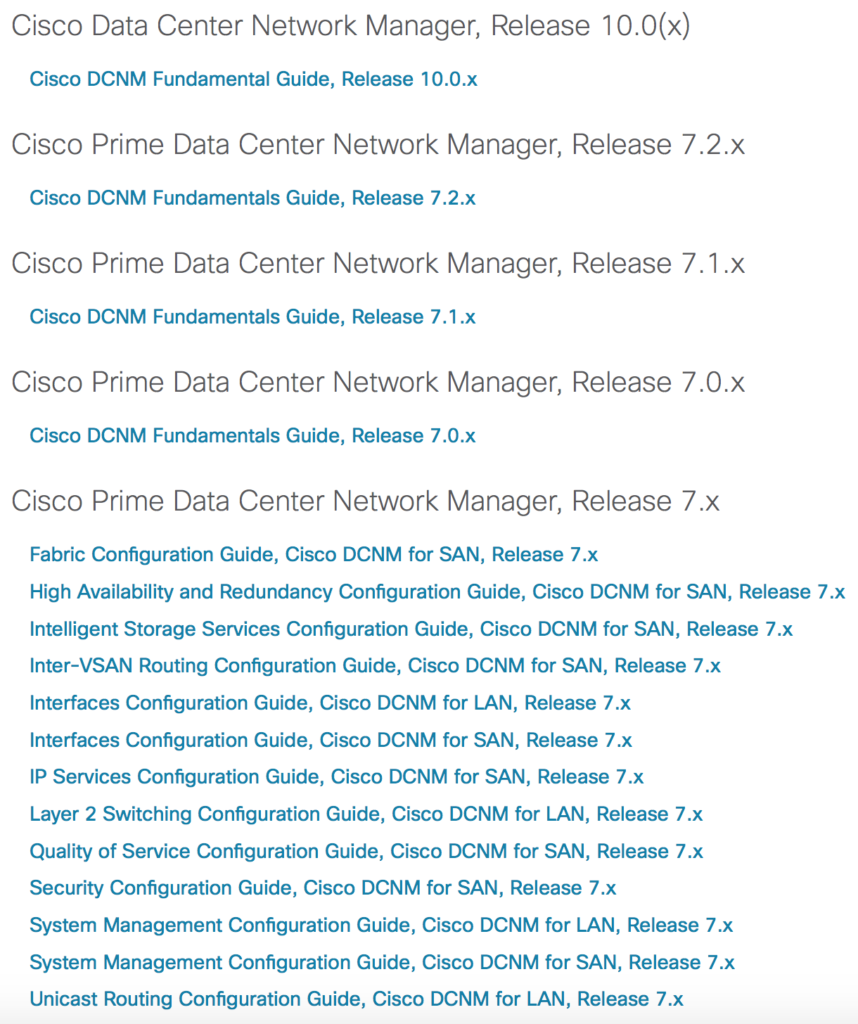 Evidently the v7 release was a beast. The document required to learn about the template syntax, by the way, is System Management Configuration Guide, Cisco DCNM for LAN, Release 7.x. Although there does not appear to be a DCNM v8 or v9, and that document has not been updated for v10, it seems to cover the basics successfully.

Once discovered, I found the documentation for the configuration template syntax a little weak, focusing more on examples than in a proper definition of the syntax. This might not be quite such a problem except that I found the parser to be quite picky at times, and the error messages are not entirely helpful in directing attention to problems in the script, so as a user it’s easy to be left staring and wondering where the error could possibly be. This is compounded by at least one use of smart quotes instead of straight quotes within the sample configuration in the documentation which means a cut and paste from the documentation to DCNM will fail.

For example, here’s a screenshot from the DCNM v7 documentation:

Cutting and pasting that code to DCNM and validating the syntax produces the following error: 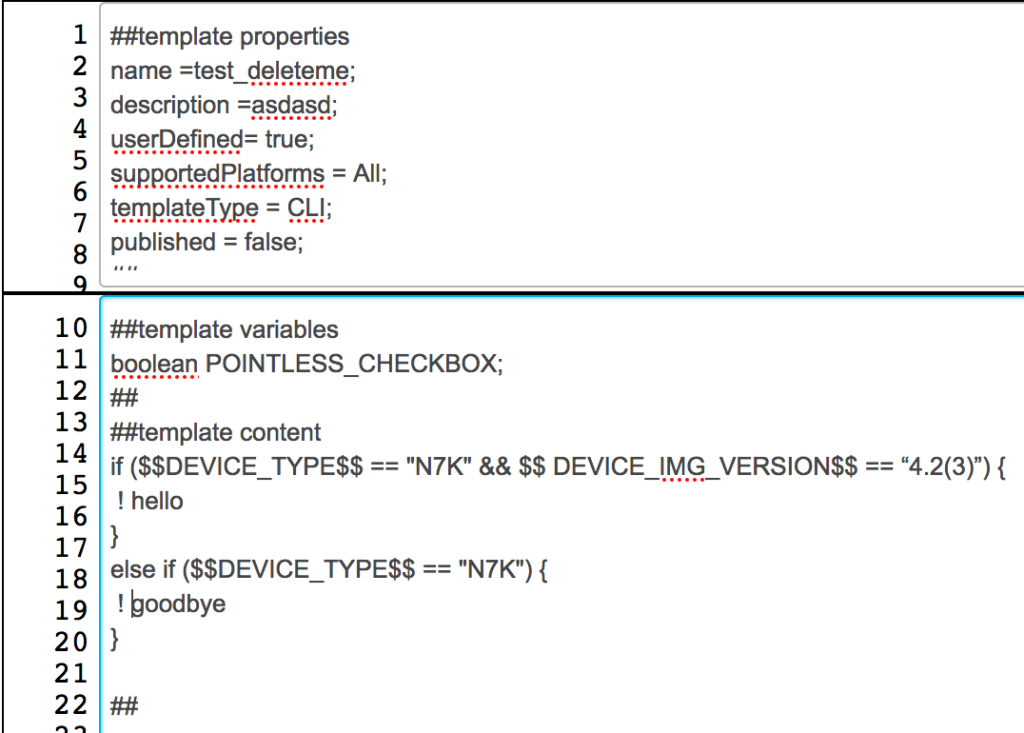 Line 12 is the ## marker indicating the end of the variables section. According to that error, DCNM expected to see the end of file (EOF) before the template content section? That makes no sense. The cause of the error is simple as it turns out; compare the quote characters:

I’m not sure why that confuses the parser, but it clearly does. For the most part the error messages are a bit hit and miss both in content and reported position of the error.

Putting It All Together

Despite having some minor issues getting straight with the syntax, I have battled on and come up with some scripts which I can use in production.

As a sample, I’ve shared a DCNM script on github called ADD_A_NEW_VLAN, which aims to add a fabricpath VLAN, set the description and configure uplinks for an edge router. It’s intended to be pointed at an entire fabric (both leaf and spine) so that the new VLAN is present everywhere and the only task remaining would be to configure an access port. The script performs some of the error checking described above, and a bit more in addition. Feel free to comment, clone or submit pull requests if you’re so inclined!

If DCNM is feeling a bit unloved in your organization, it might be worth paying it a visit to see if there’s something it can do for you.