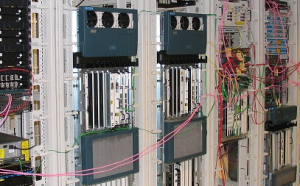 Most companies seem to want to have a Green Data Center – they’re at least shooting to reduce power and cooling (power again!) bills, perhaps because not only do you save money, but you also do good things for the environment by using less power. Obviously if you are building out from scratch there are many options you can pursue, but if you have an older existing data center, I’ve got a simple “green” tip for you.

Here’s a tip that will make you spit out your coffee in shock:

When you’re done with something, turn it off.

Easy enough? If you have a data center that’s has been around a bit – long enough to have been through an upgrade cycle – chances are that there is old equipment sitting there doing nothing except generating heat.

Ok, maybe you are better than that, but my experience is that after a hardware upgrade there’s a fear of turning off the old equipment (perhaps in case you need to roll back quickly). Then it gets forgotten about. I’ve also seen equipment that was racked and stacked ready for deployment before a project got mothballed – but it’s still there spinning its fans in case the project is ever resurrected. Are you on the ball enough to account for every piece of equipment in your data center and be sure that it’s still active? The bigger the data center, the higher the chances are that there’s unused equipment hiding out.

For me this applies mostly to networking equipment, but I’ll bet that servers work the same way.  After migrating a service to a virtualized environment perhaps, the old standalone server is left running for a bit “just in case”, and the server team says they’ll come back and decommission it later, only they never quite get round to it. Maybe after migrating to a SAN, old disk arrays are left spun up just in case that data is ever needed.

I hope that each of you lives in a better world where this doesn’t happen, but I’ve seen it often enough to believe it’s pretty common. Most companies seem to have more work needed than they have employees to cope with, and in times of stress, the first thing to go out the window is documentation. The next to thing to go is remembering to perform a “tidy up” after a change is completed and has proven itself as stable in production.

So here’s my challenge to you – if you’re responsible for equipment in a data center, find a spare hour some time and walk your equipment racks, inspecting every device you find within. If you can’t immediately identify what a piece of equipment is actively doing, make a note and chase it up. If you decide that you can turn that equipment off, make a note of the power rating and maybe look up how many BTUs it generates as well, so that you can total up how much you’re saving.

In fact, take the next step and trade in or recycle that old equipment – you’ll free up some space in your data center too. And don’t forget that if you aren’t able to re-use them, those power and network cables may have some value just for the copper in them.

With a minimal outlay of effort you can beef up your green credentials and feel like you did some good for the planet today. And it can’t hurt to let slip to your management how many power watts and BTUs you just saved, not to mention the reduction in load on your backup generators, UPS batteries and cooling systems.