The total lack of branding for Google Reader shown above I think sums up the level of effort that Google have been willing put into the product in the last few years (and possibly longer). Really, it has been the red-headed step child; a science fair project gone bad. And while the infamous “Beta” tag doesn’t seem to be present, it surely feels like that’s how it has been viewed internally, which may explain why the Google Reader web interface is so lacking.

You wouldn’t think then that anybody would care if this product were killed off, yet when Google announced the imminent demise of Google Reader, the Twitterverse went crazy; the bloggers complained, and pages started popping up all over the place answering the question “What is the best alternative to Google Reader?”

So why do so many people seem to love this criminally under-maintained product?

What Is Google Reader?

I should back up. If you don’t already know, Google Reader is a tool to allow you to follow RSS (Really Simple Syndication) feeds. You add your “subscriptions” to various site feeds, and Google Reader pulls them in to one place so you can catch up on all those sites you follow. Pretty much every website and blog will have an RSS feed, and on finding an interesting site, many people will quickly seek out the ubiquitous RSS logo and click on it so they can follow the site.

Before RSS feeds, looking for new content on web sites meant checking them manually each day, and for the busier sites you would have to remember how far you had got, and then read any new articles from there onward. With RSS, new posts are published to an RSS feed (sometimes the whole post, sometimes enough to get you interested so you’ll click on a link to read the whole post). Your RSS reader keeps track of which posts you have read, and can therefore show you only the new or unread content. The beauty of this is that you can see all the new posts from multiple sites in one place (your RSS reader) and not waste any time looking at sites that haven’t been updated.

I think RSS is vastly undervalued by many people, perhaps because it feels a little complex to some (it’s buried behind an acronym for one thing), but certainly in the fields of technology and journalism I think it’s fair to say that many people would be lost without their RSS feeds.

I mock the Google Reader UI, and with good reason, but the reality is that in fact I rarely ever log into Google Reader on the web. Really. I rely on Google Reader and I’ll miss it, but I don’t login and use it much. And yet I read RSS feeds every day! How is that? That’s because almost all my RSS reading is done on my iPhone, and rather than bringing up a web page to open Google Reader I use a client application instead.

In my case I happen to use Reeder. Reeder presents all my feeds in a quick to browse list, shows me how many unread posts are on each site, allows me to “Favorite” posts so I can read them again later and has a wide range of options for me to share a post (e.g. Quote.fm, Instapaper, Evernote, Delicious, Twitter, app.net, Facebook, Buffer, Email and so on). When I want to add a feed, I usually add it using the Reeder app rather than the Google Reader website. I find the interface so fast to use, it’s marvelous. But the app is reliant on Google Reader as the centralized repository for your feeds – effectively Google Reader acts the cloud storage for your list of RSS feeds so that you can have the same feeds visible from multiple client platforms; Google Reader, I believe, does the heavy lifting and checks all the site feeds for updates, and Reeder just grabs those results, which makes the client must faster. Reeder updates Google Reader when you mark articles as read, so I show the same subscription status in Reeder as I do in Google Reader: 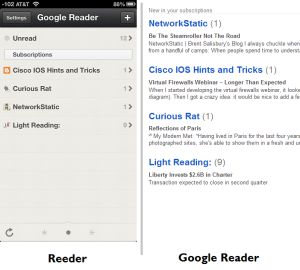 The problem here is that Google Reader just works. It’s not pretty, it’s not well marketed or branded, and it doesn’t seem to have a nice app to go with it. But as a back-end, it’s solid and it works. It’s great – and that’s why other apps rely on it.

And I Care Because?

It’s pretty obvious I’m sure, but when Google Reader closes down, my Reeder client now won’t work. To be fair Reeder also supports Fever (which I’d have to host on my own server, and costs $30) and Readabiliity, which isn’t an RSS system so won’t replace Google Reader.

I’ve been told to try Feedly, which has a really cute iOS app. Graphically it’s elegant and flowing, but I find it very slow to use. I’m used to dealing with lists of information and I can parse them quickly, so changing from Reeder to Feedly I fear would change the way I work, for the worse.

And Google Cares Because?

They don’t, and I don’t blame them. Google have no doubt put their big boy financial pants on and realized that Google Reader has three huge, and closely-related problems:

It’s funny – if I replace the word “Google” with “Twitter” in the list above, suddenly Twitter’s decision to start locking down their API and to control the appearance of feeds in third party applications begins to sound a little less unreasonable. At least, while you can argue it’s unreasonable, the business case appears to be sound on one level.

I have no clue what client I will end up using; I’m watching what happens and I’m hoping for a miracle. I like my Reeder app and really don’t want to change it, so I’d like to think that Reeder has some secret plans to replicate the Google API. Feedly, meanwhile, says that they are doing exactly that (and have been working on it for some time now), and that they will be able to migrate users from Google Reader to the Feedly service seamlessly, which is great! Maybe my Reeder client could start using the Feedly-provided back-end and I can keep using the app that I like. I’m not sure what motivation Feedly would have to do that, but I can hope, right?

Part of me would like to moan and whine about how Google is screwing me over, but the reality is that it’s a free product, and as a customer of a free product:

So I’ll just be a little disappointed instead, and tell you it’s a real shame.

Moving RSS Away from Feedburner

6 Comments on Google Reader – The Best Product You Never Used