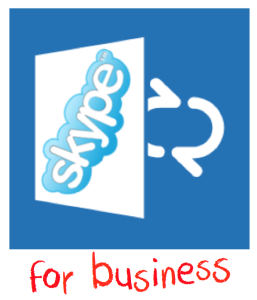 Microsoft Lync, perhaps the most well known business communication and collaboration tools, is getting a new name in 2015. The next version of Microsoft Lync, according to the Lync Team on Microsoft’s Office Blog will be called “Skype for Business.”

In other news, the next version of iTunes will be called “Napster for People With Credit Cards” and we’ll also hear from Cisco about the now-defunct plans they made five years ago to rebrand themselves as “Linksys Plus for Data Center.”

First, and most importantly, Microsoft’s Marketing Department is ahead of the game and producing videos that explain all you need to know about this new product.

So here it is; all you need to know:

I feel all warm and fuzzy about this new electronic communication paradigm optimizing and synergizing all the information flows in my business! Let’s check out those key changesimprovements:

“We’re really excited about how Skype for Business takes advantage of the strengths of both Skype and Lync. For example, as you can see in the screenshots, we’re adopting the familiar Skype icons for calling, adding video and ending a call.”

Icons. Icons are one of Skype’s strengths being integrated into Lync. Is it April 1st already? To be slightly less cynical, this new product seems to merge the Skype and Lync address books (to describe it badly) and make video calls possible between the two systems. Or is it one system now? Or is it between Skype for Business and Skype for Not for Business? I’m confused, but I have no doubt this is an upgrade we need, because the video was super convincing.

I really do like Microsoft Lync; in fact I just posted recently about how amazing it is that I was able to make a Lync IP voice call in a restaurant and keep it alive all the way back to the office using multiple audio devices along the way. I’ve worked 8+ hours a day for four months spending much of each day in a Lync meeting with my colleagues, sharing and working on documents together and collaborating with the truly pleasurable sound of wideband audio. It is so much better than the old LiveMeeting for document sharing. The web-based Lync client runs better on Apple’s OSX than the native Lync application. So while I may mock the name change, I’m not really trying to make fun of the underlying product.

I happen to think that from an Enterprise perspective value in the Lync brand far exceeds that for Skype, although that’s purely my own opinion. For years, one of my employers would not allow Skype on any corporate computers primarily because, despite all the promises, it was founded by the same lovely people that brought you KaZaA (which was notorious for being a malware and spyware delivery system); Skype was tainted with the same fears for years. Microsoft’s purchase of Skype makes complete sense, but rebranding Lync as Skype? For me that’s just ludicrous.

Maybe I’m just oversensitive. Or maybe I don’t like the idea of replacing “Hey, is a Lync call ok?” with “Hey, is a Skype for Business call ok?”. Reductio ad absurdum – always a winning play.

Skype for Business. That almost suggests that there might be a Skype for Home in our future, doesn’t it? Office 365 Business versus Office 365 Home? Are we seeing Microsoft taking steps towards a division between corporate and home users? If you have a few minutes, you might enjoy reading this analysis of Microsoft by Ben Thompson over at stratchery. I’ll end this post with a quote from Ben’s article:

[…] today’s Microsoft is, more than ever, two different companies. The line of demarcation, though, is not services and devices, but rather enterprise and consumer.