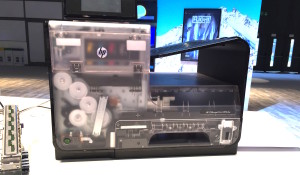 Although I attended HP Discover in Barcelona as a guest of the folks at HP Networking (via their Independent Bloggers program), I didn’t restrict myself to looking at etherstuff; HP makes way too broad a portfolio of products to get away with that. I ended up looking at printers, and I found something that pretty much blew me away.

Before I forget, please accept my apologies for the clickbait headline. I’ve always wanted to do one of those; but unlike so many others I’ve seen, I hope that this article won’t disappoint. You’ll see “the man” in the headline in a video later.

It was hard to miss at HP Discover that HP believes in eating their own dog food. The signage at the event – many large, inspiring, multicultural images reminding us that HP’s mission is to provide “solutions for the New Style of IT” – was all printed on HP printers. The signs looked pretty amazing, I have to say: 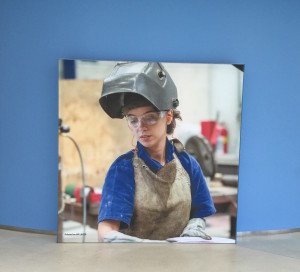 Not only were they printed using HP products, but the poster tells you which printer was used, you know, in case you wanted to buy one for your spare bedroom or something: 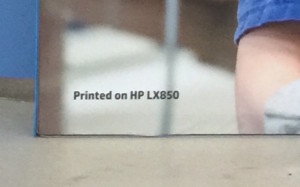 A Trip Back in Time

You’d think with these amazing printers that we had learned everything we needed to know from the previous generations of printers, but it turns out that maybe there’s still a trick or two we can reuse even today. Lets try an Age Test. Do you know what this is? 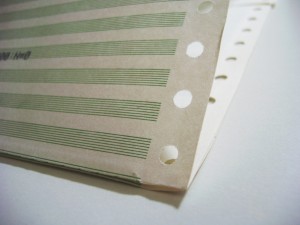 If you said it’s musical manuscript paper, you’d be wrong. The elderly among us will recognize it as continuous (or tractor) feed paper, as used in dot matrix printers. Remember the dot matrix? Print heads flying back and forth across the paper (just as inkjets do today) but clattering and clacking as they do it, as pins are electromechanical fired towards the paper, with an inked ribbon in between; kind of a very clever typewriter, if you will. A vertical stack of pins could create letters or other patterns column by column as the head moved across the paper:

An inkjet printer works in a very similar fashion, and its speed is ultimately limited by how quickly you can push the print head side to side, while still depositing the ink accurately on the paper. Back in the days of dot matrix, somebody realized that rather than having a small head moving across a wide piece of paper, perhaps they could create a “wider” head and move the paper past it. And thus, “line matrix printers” (aka line printers) were born. Line matrix printers don’t use an entire paper-width of impact dots, but get as close as they can, with multiple “single dot” heads adjacent to each other covering the width of the paper. The print mechanism compensates for the gaps between each head by stepping all the heads sideways so that all possible dot positions on the paper have a chance to be struck, before the paper moves up by another tiny notch and the process repeats in the opposite direction. The end result is a print pattern demonstrated in this great animated GIF from mimech.com:

Most importantly, line printers are faster than regular (serial) dot matrix printers. Perhaps the ideal speed improvement might be if you could have a single line of pins or hammers covering the entire page width, so each impact prints an entire line of dots. But who would do something crazy like that?

Inkjet print heads are not amazingly dissimilar to the original dot matrix. The main difference is that there are many more, smaller nozzles (dots), but in operation things work pretty much the same; the head moves side to side across the paper as the nozzles spray very fine dot patterns in sequence across each line. HP’s funky idea was to say fine, so how about an inkjet version of them line matrix printers?

In fact HP went a step further. It’s presumably not possible to create a print head the width of the page because you can’t pack enough electronics in to make that happen. HP figured though that what you can do is to take a bunch of the existing print heads, align them cleverly in a staggered pattern, and let some software in the printer deal with the weird print head positioning. So they created a new “print head” using this “HP PageWide” technology, that looks like this: 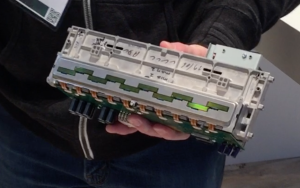 You can see the ten print heads here, each of which has 4,200 nozzles, so the total count is 42,000 nozzles. That’s a fairly decent step up from a 9-pin dot matrix! This monster print head then gets put into the HP OfficeJet Pro X, truly the only printer I’ve seen in years that has made me think that when my color laser printer dies, I might go back to ink instead. The print speed is simply astounding. At full quality (“Professional Mode”), the printer spews out an impressive 42 pages per minute. Change to “General Office Mode” which uses a little less ink and reduces quality very slightly (though in the samples I saw, the difference was not immediately obvious) and the rate rises to an amazing 70ppm if you have the faster model.

Perhaps unsurprisingly one of the available models, the HP OfficeJet ProX551dw, holds the Guinness World Record for the fastest desktop printer.

I’ve always hated inkjet for their smudgy inks, but the ink used by the OfficeJet Pro X series does not smudge. In the video I’ll upload, you’ll see it having water poured on a printout and rubbed in, and the ink doesn’t run. This is not new, but it’s a significant improvement over many other inkjet out there.

I also hate that if you pick a printout up too soon after printing, the ink hasn’t dried yet. The OfficeJet Pro X actively dries the ink as part of the print mechanism, and by the time it comes out it’s dry. That’s handy because when you’re printing at that speed the paper will pile up pretty quickly and you’d have newly printed output merrily staining the pages below them as they fell. It turns out that the underlying print engine will in fact run at over 100ppm, but the limiting factor right now is the drying capability; HP can only dry the paper at 70ppm. Isn’t technology fun?

The ink, I’m delighted to say, is entirely separate from the print head. This is probably a good thing. Can you imagine the cost? The print cartridges are brainlessly simple to remove and insert, making this possibly the most user-friendly inkjet I’ve ever seen. Check the video below to see how it works.

I have heard that for best results you may need to use HP ColorLok paper, but I can’t verify that, not compare to a good alternative, since I don’t have one to try. For sure, if you run any inkjet on regular low grade copier paper, it’s going to be a bad relationship, but this is a factor I would want a little more information on before I committed.

I took a very wobbly impromptu video of this printer in action. In it, you will see:

The show floor is a noisy environment but I encourage you to take a few minutes and watch it if you haven’t seen this printer in action before, because it’s like nothing else I’ve seen.

This step up in the capabilities for desktop printing is impressive. It’s a shame that it won’t help with those massive DesignJet printers that take twenty painful minutes to print out a visio network diagram only to discover at the end that there’s a problem with the diagram.

Ah, well HP thought of that too. They took the PageWide concept and appear to have said something along the lines of “Why stop at 10 print heads? We can use ONE MEEEEELEEEON PRINTHEADS!” At this point I fully expect a little finger to have been crooked by the lip, Dr Evil style. So maybe not a million, but enough to provide a wide format printer with a full width print head. Oh yes they did. The result is absolutely mind-blowing to anybody who has ever printed a network diagram. Watch this video, and cry a little on the inside because you don’t have one yet.

You may also as a result wish to find a baseball bat, a truck large enough to transport your old DesignJet printer, a sturdy pair of boots, a kicking sound system, a copy of the Geto Boys’ track “Die Mother******”, and a location in which to allow the boots, the baseball bat and the DesignJet to meet with an appropriate soundtrack. I think you know what I’m talking about.

Nope. Not even close. When I saw this product, I guessed that it was going to be in the $800+ range, and I was wrong wrong wrong. The slightly slower OfficeJet Pro X476dn delivers a disappointing 36ppm at full quality, and (I think) 55ppm in Office Mode. List price is $449 for print-only, or $649 in multi-function printer (MFP) form. The big brother product, the X576dw which churns out 42ppm Professional and 70ppm Office mode is $599 for printer only, and $799 as a MFP. However, these are list prices, and as an example, Amazon currently has the X476dn-MFP for $381. Under $400 for a 36ppm (color or black) printer with duplexing capabilities? Shut up and take my money!

I don’t find myself saying “wow” out loud very often, but this product did it to me, especially in the wide format version. I wasn’t at HP Discover intending to review a printer, but this product just screamed out to me as something I should write about. HP claim that this product performs like a laser but for half the cost. I haven’t done the sums in detail, but at the street price I quote above, it would likely be tough to prove otherwise. I’m seriously looking at an X476dn-MFP for my home, to replace my aging Color LaserJet c2600n which is complaining about low toner for 3 of 4 colors. If I’m about to spend $240 or so just on toner cartridges, what’s another $100 to get an entirely new printer?

1 Comment on This man pressed Print. What happened next left me speechless.