Today you get to play the SDN Definition Game: match the definition of Software Defined Neworking with the person who said it at the Networking Field Day 11 Delegate Roundtable. I’d make this exercise “drag and drop” but that sounds a bit complicated, so instead you’re on your honor not to cheat. Click on the image to see the answers in a new window. 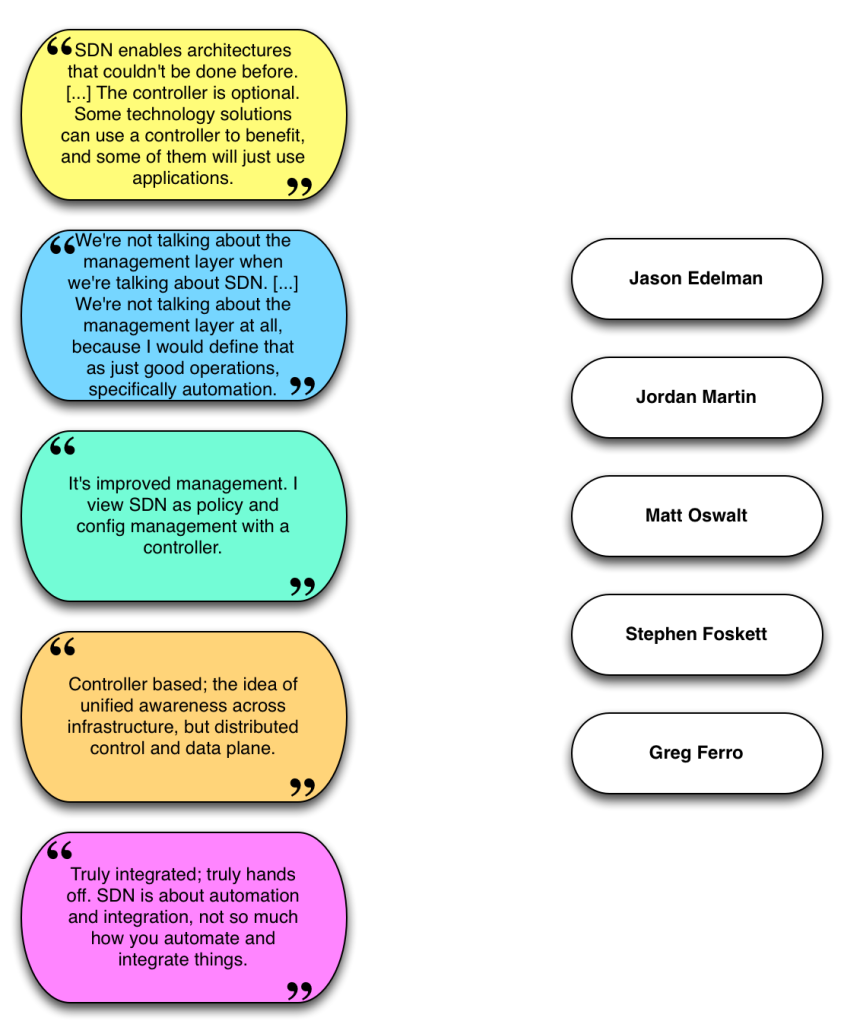 SDN, Whatever That Is

I should note that the quotes I used were taken from conversation, so if I mis-transcribed anything or used it too far out of context I apologize to the speaker concerned. In actual fact though, who said what in this case doesn’t really matter. I shared the quotes to demonstrate that even when defined by a group of smart people like these, there doesn’t seem to be one definition of SDN that everybody can agree on. That has opened the door for marketing departments everywhere to use the SDN tag on anything and everything (aka “SDN Washing”) in the hopes that it sounds impressive and thus presumably increases sales. As a result, many people – both vendors and customers – believe that SDN is becoming a four letter word. 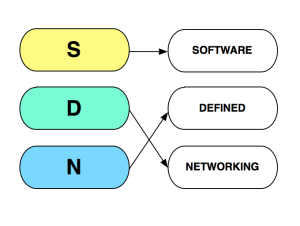 Buy the Solution, Not the Technology

I don’t care what SDN is any more. The acronym has been so overused and abused it’s hard to know how it might benefit any particular product, and the definitions we do have are so broad it could mean anything. What I want – and I suspect you want too – are network solutions that allow you to do things that you could not do before; solutions that do things better than your current solution; maybe even solutions that allow you to reduce operational or capital costs. Do we care how that goal is achieved and whether or not it’s “SDN”? No. We care about things like functionality, reliability, manageability, visibility and cost. If you or your management have determined that your corporate strategy is to “adopt SDN”, I would suggest going back and rewriting the strategy in terms of business goals instead.

If you want to hear some other opinions on SDN from a group of people much smarter than I, watch the video below. You will be able to hear all the quotes in their full context, and I’d love to hear your opinions too.

Disclosures
I was an invited delegate to Network Field Day 11 at which BigSwitch (mentioned in the article) presented, and at which the above Roundtable discussion took place. Sponsors pay to present to the NFD delegates, and in turn that money funds my transport, accommodation and comestibles while I am there. That said, I don’t get paid anything to be there, and I’m under no obligation to write so much as a sausage about any of the presenters, let alone write anything nice about them. So if I do so, you can rest assured that I’m saying what I want to say, and I’m writing it because I want to, not because I have to.