In this post, I’ll outline the program I’ll be using to demonstrate how microservices work. It’s written in go but it’s pretty straightforward. At the end of the series of posts I will upload all of these examples to github as well, in case anybody wants to poke at them.

For demonstration purposes, I’ll be discussing a very simple program that is currently implemented in a monolithic fashion. I’ve called it squariply for reasons that will momentarily become obvious.

Squariply accepts two integers on the command line, calculates the product (i.e. multiplies the two numbers), then squares the resulting number before printing the final result out. Mathematically speaking, if the integers provided on the command line are a and b, the output will be equivalent to (a * b) ^ 2.

For the purposes of clarity, I have skipped the usual error checking and validations that should/would take place. Simple enough:

Handily, the answer is correct. Since we’re going to overbake this solution, perhaps the mathematical operations should each be in a function?

I suppose I could import math and use the math.Pow() function rather than calculating the square manually, but where’s the fun in that? So there it is, some simple code ready to be compiled. Let’s build it then time the execution just for reference: 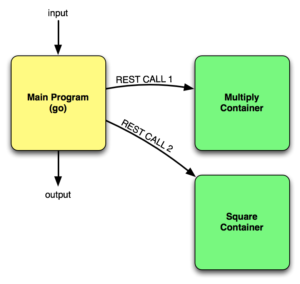 Again for simplicity, the mathematical function will be performed directly in PHP rather than calling another program to do it, so you’ll have to trust your imagination with the idea either that the function code in the container would directly accept the REST API call, or that the the received data would be passed to the code for processing. For the demonstration it’s much simpler to use apache as the HTTP daemon, a .htaccess file to redirect API calls to a PHP script, and PHP to process the call and perform the function. 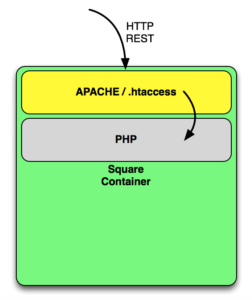 My docker containers are pretty boring. Here’s the Dockerfile I used to build the basic container image:

Simple enough: take a base image and tweak it slightly. The base image did not enable mod rewrite and did not have the AllowOverride All option set in apache2.conf, so I created a local copy of the config file with the options I wanted, and Docker will copy that into the image at build time. I also had to enable mod_rewrite and reload the service for it to take effect.

Building the new image from there is very simple:

In each of the mapped local directories, I created a simple .htaccess file looking like this:

Roughly translated, if the URL begins with api/ and doesn’t point to a file or directory that actually exists, apache will call a script called /api.php and put everything after the initial api/ as a request variable passed to the script. So if I request http://localhost:5001/api/multiply/?a=2&b=4, the regular expression in the RewriteRule will match multiply/?a=2&b=4 and, as the first match in parentheses, it will populate $1. The api.php script will believe it was called as http://localhost:5001/api.php?request=multiply/&a=2&b=4. Now I can use api.php to process the querystring passed to it and figure out if the request is for a function that’s supported, and handle it accordingly.

First, a disclaimer: while I will tell you that I am not a programmer, when it comes to PHP I am really not a programmer. However, I can hack my way by enough to make this work ok. All I need is a script that checks the function passed in the querystring and grabs the variables passed in (a and b in the example above), does some simply math, then returns a result. My code, such as it is, looks something like this for the ‘multiply’ server:

As you can see above, I opted to send back the response in JSON format. This is overcomplicated when to be honest I could have got away with just sending back the result, but isn’t it just the cutest?

Does my mini-API work? Of course it does:

So what’s missing? I need a program to accept the arguments, make the REST calls and process the results. Once that’s running we’ll have some kind of microservices thing going on, and that’s something for the next post in this series.