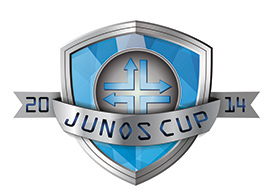 Some fun today. Juniper recently ran a competition they called the Junos Cup 2014. It was modeled after a world cup of sorts, with each challenge involving a country in the name, four Tournament and then – because in the real world there was a three-way tie – a final Sudden Death Challenge.

The whole thing was played out online, but Juniper decided to make a little book out of it all, and they were kind enough to send a copy to me, which I have been thoroughly enjoying reading.

I have to confess, I wasn’t sure at first whether reading a book of challenges (the answers are in the back, by the way) would be interesting; in fact I feared the opposite. However, each challenge is typically only two or three pages long, and the solution typically involves just one, two or three commands. That’s pretty neat, but it’s not necessarily easy.

Each chapter starts with a set of statistics – how many attempts this group of challenges generated, which of the challenges were most popular, and which (based on correct submissions vs attempts) were deemed to be the easiest and hardest. That’s pretty cool, because it’s reassuring to stare blankly at a challenge thinking you must be stupid not to get it, then realize that you were not alone in flaking out on the challenge 🙂

Here’s where the challenge got really good in my opinion. Juniper didn’t just issue the challenges, but actually built the topologies in Junosphere (their online virtual lab environment) and then made Junosphere available for anybody to use and actually do the labs themselves.

This is cool. You don’t have to build any simulations yourself. You don’t have to pay for access to Junosphere. You just login and try to solve the problem in a prebuilt environment. How much easier (at least logistically) can it possibly get? And as a marketing tool for Junosphere, I have to think that Juniper sold a few more hours as a result of people trying out the environment for themselves.

Access to Junosphere is via Juniper’s Java-based VPN client which I have noted before can be fun on OSX. I ended up running the client, yet again, in Firefox. You might want to look at my previous issues with the Juniper Pulse Collaboration client, as I suspect many of the same issues are at play here.

And they’re fun. You really can’t do the challenges without logging in, because you need to see the active configurations. However, let’s look at Greece (as pictured above) as an example. The challenge was to issue two set commands (either two commands on one device, or one command on each of two devices) that would allow traffic between the two routers to be encrypted in an IPSec VPN.

I’m not a Junos expert, but I know roughly how VPNs are set up, and it looked at first glance like the IPSEC configuration was all in place – and it turns out it was. What was missing was the command set security zones security-zone untrust host-inbound-traffic system-services ike. I had a hunch that there was something missing like that, but since I didn’t know what it was offhand, it took all of a minute to find an appropriate source showing the necessary steps and confirm that indeed that was the command missing. And it felt good, even though this was apparently the easiest topology in Tournament One, and I’d looked up a reference. Still, better than looking up the answer in the back, right?

You Can Play Along at Home Too

Instructions to set up your access to the Junosphere topologies are available online and you can also download a PDF of the Junos Cup 2014 book. The challenges are also available online within J-Net, but the solutions are right at the end of the challenge now, so it’s almost impossible not to read it – so I recommend the PDF way.

If you’d like a Junos-based challenge that you can take at your own pace (the “live” competition is finished now), this is a pretty cool set of topologies that make you think a little about what is going on, and since the solutions are short, you don’t feel like you’re totally at sea looking for the answer.

Give it a go and let me know how you get on!

Thanks again to Juniper for mailing me a soft-cover copy of this book.