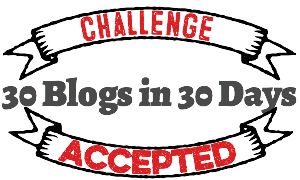 So with some triumph and minor exhaustion, I completed Etherealmind’s 30 Blogs in 30 Days challenge; but so what? Does it change anything? Do I get a prize?

Here’s what I learned.

As a reminder, I started this challenge on October 16 and posted every day from then until November 16 (actually just over 30 days, but who is counting). I found the process quite interesting, so I decided to share a few things that struck me along the way.

It sounds obvious, but if you’re a blogger, how many times have you thought to yourself “Oooh, such and such would make a good blog post,” then when you have a chance to write some content you go blank on what this great topic was? I have this happen a lot. Trying to create one blog post a day meant that forgetting posts topics was not a luxury I could afford to have if I wanted to avoid staring at my screen for hours. I had to start keeping a Notes file open on my phone, occasionally took an audio note, and kept an iCloud-synced “Ideas for Blog” file in MultiMarkdown Composer. I found that content is much easier to generate when you can remember it, and I realized that I have lost so many potential posts in the past that not making a note of the at the time was really a loss to me.

Lesson 1: Write down your ideas the moment you have them.

Get Ahead of the Game

I knew that over the period of the challenge there were going to be some days where I simply could not write a post, which would lead to challenge failure! To be fair, Greg Ferro did say that weekends were an obvious one to plan on skipping, but I decided that I would include them, for reasons that I’ll outline below. The obvious way to avoid failure then is to write more than one post on some days, and schedule them for publication one day at a time. By doing this I was able to give myself a fairly consistent 3–4 day buffer of scheduled posts and was able to avoid a panic situation when time was short.

Lesson 2: Create a small buffer of posts to take the pressure off

Weekends are tricky as a blogger. For people who stay up to date on their RSS feeds, weekends may be times when your blog isn’t being read. Certainly the site statistics confirm that weekends have lower readership levels than the weekdays, so am I “wasting” a post by publishing on a weekend? I say no, but I also made a conscious decision about how I was going to use Saturday and Sunday posts. In my case, Saturday would be for shorter or more frivolous posts (for easy weekend reading) and Sunday would continue to be for Secret Sunday posts. I also chose to publish weekend posts slightly later in the day (Eastern time) just because I know that my US readers at least are likely to be enjoying a lie in on the weekends! Anybody who misses them and reads them later will find the posts easy to catch up on because they’re short and simple posts.

Lesson 3: Decide how to tackle weekends (or skip them)

The one thing about creating a small buffer of posts is that when something happens that requires a timely response, there’s no point putting that on the end of your queue of posts of publish. I forced myself to write posts like that and schedule them sooner rather than later, then rescheduled the posts that were already queued in order to make space for it. Unless you’re working through a predetermined sequence of posts, this shouldn’t make much difference – it’ll all get published in the end.

I hope that I managed to maintain good quality in the 30 day challenge (or at least, not significantly worse than “normal”). I tried hard not to force the quantity of posts out at the cost of making the posts badly written or error-ridden. This is definitely one of the dangers of this kind of challenge and it’s one to stay aware of.

I had fun doing this challenge and I was pretty pleased at the end to have succeeded with what I think were a decent set of posts. Would I do it again? Probably, but I certainly can’t maintain a post every day indefinitely; life is too short! Nonetheless, I hope you enjoyed it too.