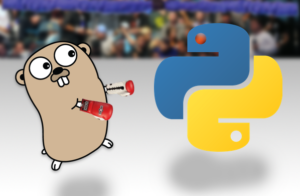 Which is faster, Python or Go? And by how much? This is the question I found myself asking earlier this week after troubleshooting a script that my son had written in Python to calculate prime numbers.

In The Red Corner – Python

My son worked out a fairly simple algorithm to generate prime numbers which we tweaked slightly to optimize it (things like not bothering to check even numbers, not checking divisors that are larger than 1/3 of the number, not checking any number ending in 5, and so on). I’m not saying that this is production-ready code, nor highly optimized, but it does appear to work, which is what matters. The resulting code looks like this:

Yep, I really still need closing braces to see what’s going on. Anyway, the idea was to print out prime numbers between 1 and 100000. So let’s time it running:

In the Blue Corner – Go

Being a smarty pants I thought I’d use this as an excuse to practice writing in go. I ended up fiddling the values To be as fair as possible, I used the same algorithm to calculate the primes and ended up with code looking like this:

That should be pretty simple to follow, I hope. This code also appears to work, so I timed this as well.

And We Have A Winner!

Get that; Go performed the same task in just under 1 second. Now I need to know what happens when I actually compile the go code and run the resulting executable.

Your eyes are not deceiving you. Go produced the same 9592 numbers in 0.69 seconds, almost ten times faster than Python. That is just something else altogether.

It may be that I'm doing something in Python that's an obvious don't do or that I'm simply using a very computationally expensive way to achieve my goal, and any experienced Python programmer would suggest I did it a different way. However, for something so simple to see an order of magnitude difference between the two languages either makes Python look very slow, or Go look very fast, or maybe a bit of each, at least for this particular calculation.

I will say that Go has been impressing me with how quickly it performs REST API interactions in some scripts I've been writing, but even so, wow.s

So why is Python apparently so slow here? Can you optimize either piece of code and either narrow or widen the results gap on your system?

5 Comments on Python versus Go – Fighting in Prime Time