As mentioned in a recent post, I’ve been working casually in the background to improve my home network which has, ironically, suffered from a degree of technology neglect. Perhaps when you work with networks all day, the motivation to then do them all night as well is weaker than it might otherwise be? That said, I’m feeling energized right now for some reason, much to the benefit of the house which has suddenly gained two additional wireless APs and some structured cabling, and is planned for a total network rewire in the next week or so. One of the APs is even dual-band 802.11n, so I’m borderline “current” on that one.

To be honest, I tend not to invest in the latest and greatest technology around my house – it seems kind of pointless – and I’d rather get the most out of the hardware I already paid for. To that end I’ve spent a couple of evenings working on a little side project for the home network, and the end result – while so far successful – has left me feeling distinctly old.

One of the things I’ve wanted for a while is to have a proper DNS server on my home network. Gone are the days when there are only two devices on the average home network – a computer and the gateway router – and frankly I can’t keep track of all the devices any more. When I remember, I jump on the router and create static DHCP mappings for my devices, but it’s not quite the same as being able to look up an IP and get a name back for it.

And so began the quest for a machine on which to run a BIND server. Or actually, two machines, as nobody would be stupid enough to put all their eggs in a single server basket, would they? I’d prefer not to at least – the last thing I need is for the DNS server to fail and leave my (albeit self-described “former geek”) wife to sort out the ensuing mess. No; better to have a backup. I’m not big on servers unfortunately. I don’t even have a working desktop PC any more – my wife has one, but for me it’s all laptops. I have a work laptop, a personal laptop (my old work laptop), and two laptops for the children (one old, old work laptop, and a cheap Lenovo that was on special at Fry’s). Spare computers? Um, not so much. But wait – yes I do. I have, sitting in a desk drawer, two old laptops that I might be able to press into service for something like DNS. After all, it’s not exactly a trying application on a small scale, and if I only need CLI access, sucky CPU and graphics won’t impact me too badly, right?

The first machine out of the drawer was a Dell Latitude C640. This gem from around 2002 or 2003 feels almost modern. Kind of. The Pentium 4m 2GHz processor is positively screaming compared paired with 1GB of RAM and a 12GB hard drive. Actually, when I first booted it up it had a 2008-dated 100GB Seagate Momentus drive in it, but that was failing in front of my eyes so I put in a much older drive (possibly older than the laptop itself) that was still working just fine. As a result, the life expectancy of userv1 (its new name) is probably low therefore, but you know what, if I get a few months out of it that’s still better than spending $80 for a new drive on a project that might die a death, don’t you think? If this works swimmingly well, I might buy a new drive later on and rebuild it. Meanwhile, reuse… reuse.

The drawer in my desk is evidently very deep and possibly extends right to the gates of hell, as the second computer I pulled out is a Dell Latitude CPx from 1999-2000. Oh. My. God. Seriously. Quite why I still have this Pentium IIIm 750MHz-based doorstop is escaping me, but with a 20GB hard drive and 512MB of RAM, who wouldn’t just love to have this as a server in their house? The hard drive seemed to work on boot and Windows 2000 loaded, but since I can’t remember my password that was as far as I got before blatting the disk for OS installation and the creation of the imaginatively named userv2. I have no idea now old the hard drive is by the way, but it can’t be much newer than the 12GB drive in the other machine I’d think.  I’m doomed, aren’t I?

Linux of course is the OS of choice; experience tells me it will suck up most hardware reasonably effectively and run out of the box, and since (to paraphrase Star Trek’s “Bones”), dammit, I’m a network geek not a server admin, I’d rather not have to mess too much with the system. In the end my pseudo-random number generator selected Ubuntu 11.10 Server as the CLI-based OS of choice. One ISO later and I’m ready to install.

The installation process on userv1 was pretty uneventful. I’d done a test install in Oracle VirtualBox just to make sure it was what I needed, and there were no surprises there so it was a simple task to plug in a network cable to the Dell C640, power it up and follow the prompts.

My first “oh God I’ve been doing this too long” moment came when I went to repeat the process for userv2 on the CPx. I’m sitting there with a network cable in one hand, rotating the laptop and searching the outside of it for a network port that, I discovered, didn’t exist. This puzzled me for a minute – how on earth had we connected out before? It can’t have all been modems, surely? But where’s the modem port? At this point, I know I’m wrong and I’m being stupid, but for the life of me I cannot think what the answer is. Finally though, ten years of clouds clear and I remember – oh hell, everything was on PCMCIA cards!

Thankfully, as should be clear from the fact that I had an 8- and 11- year old laptop lying around, I’m kind of a hoarder. A quick dig in a box of networking ‘stuff’ turned up this little pile of joy: 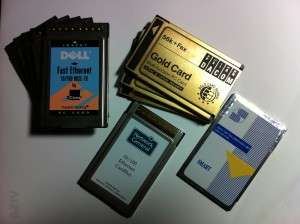 A top quality iPhone picture for my top quality finds. The Dell (3Com) and Network General cards are all 10/100 Ethernet adaptors; the Psion Dacom Gold Cards are modem cards, and the Smart card is in fact an old 20MB Cisco Flash card for a 7500 router. Those readers too young to have ever had to use one of these antiques for connectivity should understand that since PCMCIA cards are only about a 1/4″ thick, there’s no space for an RJ45 socket. Instead, you use a short dongle that’s made to withstand a light breeze before the PCMCIA plug deforms and snaps off: 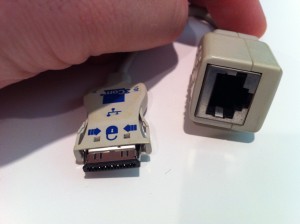 I’m not kidding. When I was younger, it was wise to carry a spare dongle; one snagged Ethernet cable pulling on the dongle and it was all over. Ah, memories of the technology of yesteryear.

And suddenly, I felt very old.

Was this really only 11 years ago?

It’s an obvious truism, but it’s staggering how far things have come in such a short time. We are so demanding of our electronic products (and interestingly, I remember being similarly demanding 11 years ago) – but it’s sometimes worth a reminder of how much progress has been made.

That said, Ubuntu 11.10 installed like a champ, albeit a little slowly, on to both laptops – no driver issues at all. It detected the PCMCIA network card on the CPx no problem, and used the network as part of the install process just as it had on the C640. Brilliant.

My next task is to finish configuring BIND. I have the first set of hosts configured in forward and reverse zone files for IPv4 and IPv6 and testing looks to be successful. All that’s left is to configure userv2 as a secondary and I may be ready to bring them into ‘production’.

At least, I would if I had any network ports spare. I’m going to have to do that total network rewire sooner than I thought!

If you remember this, you’ve been doing VoIP too long as well… and yes, this is something else from my piles of hoardy-goodness: 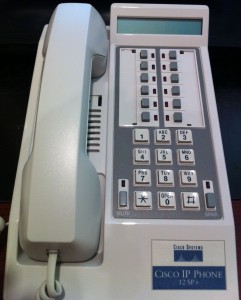 More fun old technology lying around my office. This used to be a regular feature of my job – a Spider Systems Spiderport Atom terminal server:

These were actually surprisingly reliable little boxes, used in many places with VT (or similar) terminals. As I recall, many UK libraries had these supporting the computer terminals. This particular Atom is from pre-1995 I believe, as Spider was bought by Shiva in 1995 and the branding changed to make it a Shivaport Atom instead. Shiva in turn was sucked into Intel a few years later and was never heard from again. 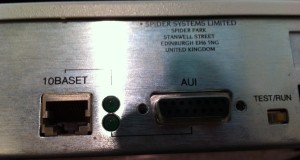 I wonder how many of today’s network geeks have ever seen an AUI transceiver? Mind you, at least this had 10baseT, which will look familiar to most. What about thinnet? Thicknet? Arrrrggh.

Are you feeling old too? Share your museum-worthy horror story below!

4 Comments on The Technological Age