First, please accept my apologies for the terrible grammar in the title, but really, what better name could I use for a post that is the sequel to “When BGP Aggregates Go Bad“?

Having learned one critical lesson about the redistribution of locally-originated aggregates (described in that last post), I saw an issue recently that could potentially be present in quite a few networks, and the network owners may be totally unaware of it until it’s too late.

As long as one or more of the more specific routes are active in BGP, the aggregate will be generated and everbody is happy. 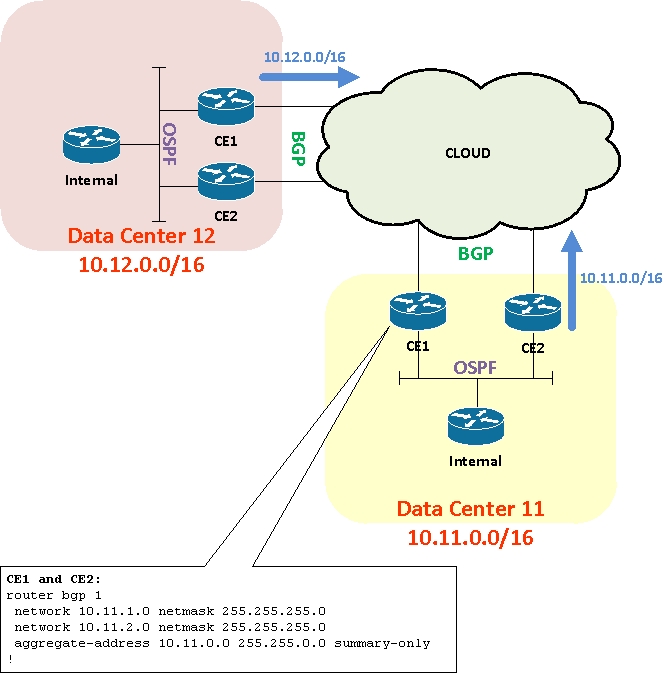 The network architecture above shows two corporate data centers routing to each other over a cloud – it doesn’t particularly matter whether that cloud is a private network, provider MPLS or the Internet. The key point is that BGP is the protocol running at the edge and connecting to the customer edge (CE) routers. We’re responsible architectrs, so we’re dual connected to the cloud from each data center.

Each data center has been given its own chunk of IP space, and while multiple subnets are used within the data center, the edge routers generate a single ‘summary-only’ aggregate route representing the data center’s IP range. The ‘cloud’ therefore only knows two routes – 10.11.0.0/16 and 10.12.0.0/16.

Let’s imagine that a large system using 10.11.99.0/24 has to be moved from Data Center 11 to Data Center 12, but cannot be easily re-addressed. This isn’t a huge problem – move the system and simply advertise 10.11.99.0/24 out of Data Center 12. From a routing perspective, this is nothing spectacular. Architecturally (from an IP address summarization perspective) it sucks, but sometimes you don’t get to choose. 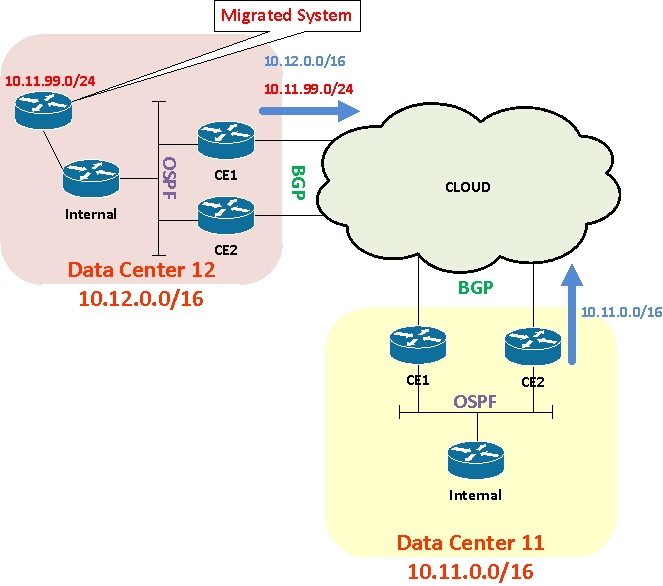 I’ve described one example here, but in principal this problem can be triggered by any scenario where a range of summarized data center IPs are ‘hijacked’ and used elsewhere in the network.

Now let’s think about what happens when the LAN connection on one of the DC11 CE routers goes down: 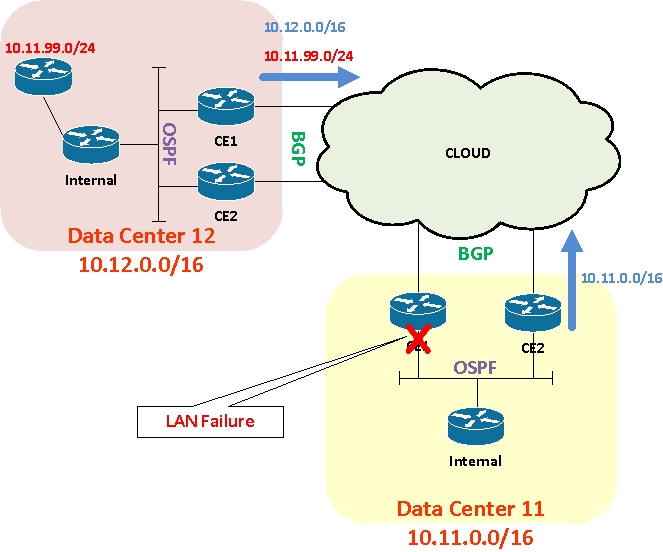 OSPF on the LAN drops, so the BGP routes generated by network statements on that CE will be withdrawn. And that in turn means that the CE will withdraw the BGP aggregate 10.11.0.0/16 advertisement to the cloud.

Wait though; not so fast. While that’s what you might initially expect, that isn’t what happens in this case. Some of you will have already spotted that even though none of the locally originated routes exist, the dead CE will still be receiving 10.11.99.0/24 from the cloud, and consequently it faithfully generates a 10.11.0.0/16 aggregate route and advertises it back to the cloud! Result: traffic traversing the cloud will still see two paths to 10.11.0.0/16 – one via the working CE, and one via the dead CE that will null route the traffic. Potentially half your traffic could be blackholed. With MPLS in the cloud, from some locations, ALL traffic might be lost if the ‘dead’ CE was chosen as the preferred exit point.

There, I Fixed It!

So how do we fix this? There are a few ways one could consider approaching this (and probably more – let me know your ideas in the comments).

Which solution is right? Well ok, I eliminated #1, but the others are all valid options. I’d strive for #2, but are you sure that nobody will ever use an overlapping subnet and advertise it into the cloud in the future? No, nor me.

And so we learn that BGP aggregates are really cool, but we have to be careful how we think about them. In my head – and I suspect many other people’s head too – they can feel a bit like OSPF summary routes, and we think about our own BGP AS as the area that the aggregate summarizes to other areas (or autonomous systems). The reality though is that there’s no split horizon logic going on with BGP – it will happily receive a route from ‘outside’ that triggers generation of an aggregate that is advertised right back where it came from!

Have a think about your own network – do you use aggregates? If so, it is possible that you could get caught by this same problem in the future? A WAN failure, of course, would not be a problem – the CE would be isolated from the cloud and couldn’t cause problems.

Do you have any other solutions or comments on this scenario? Let me know in the comments. 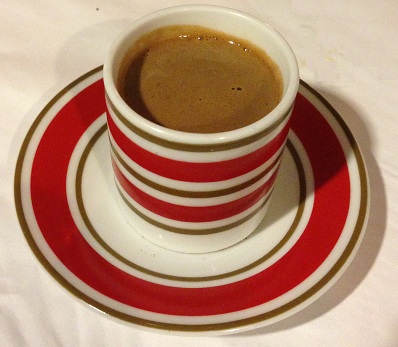