Last November, I was invited to the inaugural Juniper customer summit, NXTWORK 2015, and it was a great event. I’m pleased to see that NXTWORK2016 is happening again this year, October 3rd – 5th, 2016 at the Santa Clara Marriott in Santa Clara, CA.

Rewind the clock to last year. For years, Juniper users have wanted a Juniper technical event if not to rival Cisco Live, then at least to offer some of the same benefits to the attendees. As anybody who organizes a conference will tell you, it’s no mean feat to get even a small event right — Cisco has had 26 years to get Live to where it is now — so I can only imagine how daunting it must be to set up the first Juniper customer event, knowing full well that everything you do will be compared to Cisco Live, just as I am doing now. Wisely, it seems that Juniper decided to look at the basics of what attendees would expect to be at the conference, then wrap those up in its own unique way. While there were a few minor inevitable teething issues, my overwhelming feeling at the end of the conference last November was This was great! When is the next one scheduled?

If you didn’t hear about last year’s event, there’s good reason for that: Juniper intentionally did not make a big public noise about it. The 300 or so attendees (my guess not an official figure) were all there either by direct invitation from Juniper (like myself, and the Juniper Ambassadors group) or received an invitation through their Juniper account team. This may not be how things will work going forward, but for the first event — and possibly for NXTWORK2016 also — it allowed Juniper to control the size of the attendee group. As I see it this was a little like having a ‘soft opening’ at a casino; it allowed Juniper to try out their ideas on a few hundred attendees and see how they worked out. I’ve already seen that some of the feedback and suggestions I and others gave after NXTWORK2015 have been incorporated into the plans for NXTWORK2016, which is reassuring, and I hope will make NXTWORK2016 even better. Over all I believe that the idea of having a limited first event was a good one; iron out the wrinkles before opening it wide to the public.

The technical breakout sessions I attended in 2015 were mostly great; not all were perhaps quite as technically deep as I would have liked, but some hit the spot perfectly, and this is the nature of offering sessions to appeal to a wide range of attendees. I was able to stalk (I mean, attend sessions presented by) legends like Doug Hanks Jr, and given the limited number of attendees, Juniper offered a fairly wide range of topics for the sessions on offer. The breakout session catalog didn’t have all the detail that I have come to expect, but I know that feedback was well received and I have a suspicion that this year’s catalog will be more comprehensive.

NXTWORK2015 had a VUE test center on site, as we’ve come to expect at this kind of event. I have a feeling that they were able to be generous with the testing with a the limited number of attendees and I don’t know how many tests they will permit in the future. My JNCIA-JUNOS had recently expired, so I took the opportunity to retake that exam, and having pass it was then allowed to continue and take the JNCIS-ER and JNCIP-ER exams too. I wouldn’t expect that level of kindness in the future, but I was extremely grateful for the chance to take the exams and come out with three certifications!

The main social event was held in an event venue at the brand new Levis Stadium with access outside to see the stadium itself. 300 of us rattled around a little in what was a relatively large venue, but I enjoyed being there and spend a long time talking to people. Food was ok, beer was plentiful, and I have to say, the venue is quite impressive. It’s very different having an event with 300 people versus one with fifteen thousand, and that led to it being a far more interactive event where you feel cared for, rather than just another ant in the yard. Here are a few pictures of the stadium because, well, it’s a cool stadium (click to see full size image): 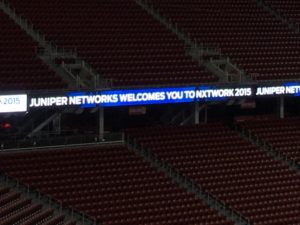 The set up of the main presentation room was interesting. There were round dining tables at one end of the room, a sponsor midway in the middle, then a seating area in front of a stage where the presentations would take place. It sounds a bit strange, but it actually worked quite well, and let’s never complain about the long walk between the keynote and the lunch tables again. Even the keynote seating was unusual though; take a look: 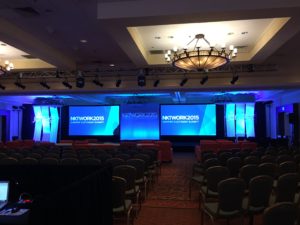 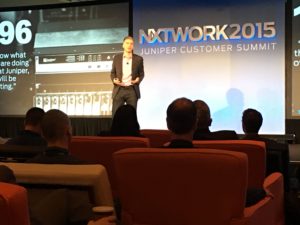 Yup. Have you ever attended a keynote where the front seating was composed of comfortable armchairs? Me neither, and yet I think it was a nice touch that added an air of friendliness and relaxation to the environment, and that was exactly the point. Juniper wanted this event to feel intimate and welcoming, and they succeeded. More to the point, that best seating was not pre-allocated to the Juniper execs, or to the people attending an executive symposium (Cisco, take note); it was available to anybody. It’s hard to explain how important that is psychologically, to feel that you as a customer are as important as every other customer there. 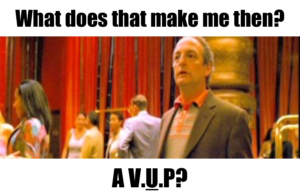 One of the lunchtimes was split with the first half being pure eating time, and the second half used for informal ‘Meet the executive’ sessions which were whiteboard-style group meetings. From memory there were five areas set up; four of them were in the corners of the lunch area, and the fifth was over by the keynote stage. I looked at the list of available sessions and realized that one of them was being offered by Pradeep Sindhu, Juniper’s co-founder and CTO, and I jumped at the chance to talk with him. Incredibly, at the prescribed start time there were perhaps four of us there. By the time we started there were maybe five of us, but by the end there were at least 30 people crowding in. Why? Pradeep introduced himself and said something along the lines of Ok, there’s no agenda; I have no presentation lined up and no speech. Instead, I’ll answer any questions you have

How so many people missed this is beyond me, as it was a golden opportunity to get some insight into the mind of the technical leader of Juniper. What impressed me most on a personal level was seeing that when Pradeep answered a question, he had mapped out in his head the full and detailed answer. Instead of a powerpoint with bullets, he appeared to think about the question, build the powerpoint, then is able to present his response in a remarkably structured fashion. It’s at times like this I realize quite how awful most of us are at responding to questions. In particular, I enjoyed hearing Pradeep’s thoughts on Network Functions Virtualization and the place of general purpose CPUs versus task-focused ASICs. The session was perhaps 30-40 minutes long, but was probably the highlight of the event for me. 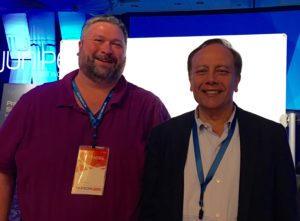 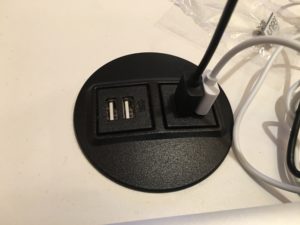 What made NXTWORK2015 different were the small touches. For example, the conference area was well-furnished with USB ports and, more importantly, common charging cables. I know at least one person who forgot their cable and was incredibly grateful to be able to charge his phone! The keynote sofas were great. Juniper employees of all levels were there to talk; they weren’t being hidden behind an agenda and a security team, they were available. The food was better than average, perhaps a result of cooking for a few hundred rather than many thousands, but either way, I am not complaining! Throughout the event, it was clear that the intent was to be welcoming and friendly, to make attendees feel welcome, and give the feel of an attending an intimate event where you are relaxed and welcomed, rather than an an anonymous blip in a clinically organized environment. How Juniper will scale that feel is going to be another challenge, but if they succeed, Juniper will have carved out a new way to conference.

NXTWORK2016 is October 3rd – 5th 2016 in Santa Clara, CA. Registration says once again to be an invitation only event, but if you have a Juniper Account Manager (or similar), don’t wait to be asked: why not ask them for an invitation? I hope that in the future this will be a public event, but if you have a relationship with Juniper, you owe it to yourself to ask your Juniper contacts how to get invited because it was a unique event that in many ways defines how conferences should be.

I was invited to attend NXTWORK2015 by Juniper Networks, and my travel, accommodation and conference registration was covered by them. However – because I won’t do it any other way – I will be clear that Juniper doesn’t pay me to be there, and I’m under no obligation to write so much as a tweet about the event, let alone write anything nice about it. If I have written about this event you can rest assured that I’m saying what I want to say and I’m writing it because I want to, not because I have to.