What to say about NXTWORK2016, Juniper’s second customer conference? In short, I’m impressed.

The San Jose Marriot was once again the venue for the two-day NXTWORK conference, but this year things were clearly scaled up a little. Food tables which last year took up around 1/3 of the main ballroom this year moved to a large marquee which had been built just outside the hotel (it’s much better than it might sound at first). 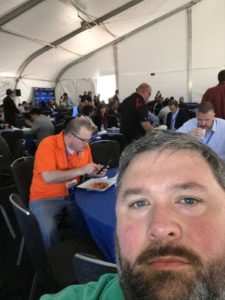 Replacing last year’s food tables was a Social Media lounge which confused me slightly only because it didn’t seem to be much of an actual lounge, although it did seem to have a couple of classic PacMan machines to amuse anybody sitting there. 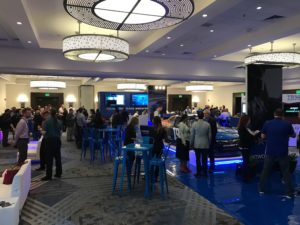 The middle section of the ballroom was occupied mainly by sponsor stands in what I think Juniper was once again calling a ‘midway’, and there was some comfortable seating as well. 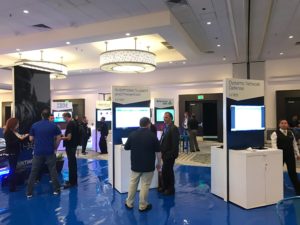 The remainder of the ballroom had been divided off and was set up for general sessions and keynotes. Just down the hallway were a number of other rooms set up for technical breakout sessions and, as last year, a testing center where attendees could take Juniper exams.

Over the two days of the conference there were general session presentations from:

Despite having a larger audience than last year, the front section of seating was once again made up of comfy chairs and sofas, a homey touch that I still really like.

As to the content of the keynotes, I will likely write separate posts looking at, in particular, Rami, Pradeep and Jonathan’s presentations, since they give indications as to the current direction of the company.

The General Sessions were MC’d by Carter Kersh (Sr Director, Americas Field and Partner Marketing) whose colorful and flamboyant personality blended with a perfect amount of self deprecation and irony (with an assist from some excellent socks) to make him a fun host who kept the audience amused.

Carter’s most significant moments undoubtedly came when he sat down on stage with the guest speaker, actor and comedian TJ Miller. It was clear that TJ Miller’s general irreverence and hilarious one-liners were turned up to 11/10 for what I can best describe as a very respectable attempt at an interview in the face of a maverick determined to own the conversation and all the attention.

I give Carter full marks for surviving – and indeed enhancing – TJ’s onslaught of wickedly funny zingers and outrageous comments, which had the whole audience cracking up time after time.

I believe there was at one point supposed to be a tenuous theme that linked to his character of Erlich Bachman in HBO’s Silicon Valley, but by the end I’m not entirely sure what it was, and honestly, I had such a good time, I really didn’t care. 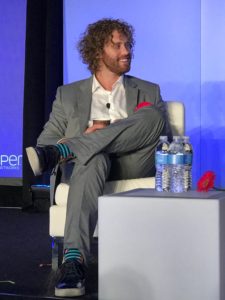 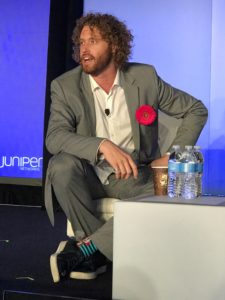 TJ Miller was also sporting a lovely colorful pair of socks (in this case with large clown faces on each side). If you can’t tell, this was absolutely the highlight of the event for me, and an amazing way to close out the conference on Wednesday afternoon. Bravo!

I was going to post an explanation for the video and image below, but after some consideration I rather think that posting them without any context is rather apt. So here they are:

Before he left, TJ Miller grabbed the piñata head and gifted it to me. I shall treasure it always and call it Betsy.

There had been a definite effort to minimize the number of ‘marketecture’ breakouts offered, which, as a geek, I very much appreciated. As you would imagine, automation was one of the key themes in the session topics, but there were also some great product sessions like Salman Syed’s NFX250 Deep Dive, and Damien Garros’ EVPN/VXLAN for DC best practices and automation was a great blend of hardware capabilities and protocol nuances which provided some great information. Overall there were, I believe, 39 technical breakout sessions to choose from, with five running in parallel at any one time, and I felt that the sessions I attended provided me with good information and were worth the time to attend.

I don’t have official attendance figures, but I would guesstimate around 400 people were there, with attendees including those from a fair number of very well known companies. This is a comfortable and friendly size for a conference, meaning it’s possible to pay individual attention to the attendees and make sure they don’t just feel like a number. Perhaps the greatest achievement is that while I left feeling positive about Juniper, I did not feel as if I had spent two days being force fed Corporate KoolAid.

One of Juniper’s challenges in the years to come will be to grow the conference so that more people can benefit from it, but maintain the intimate atmosphere they’ve created so far. I like that Juniper is not jumping straight in and trying to do a massive conference, but instead is dipping its toe cautiously in the water (as it were), then using the feedback from NXTWORK2015 to guide NXTWORK2016. My contacts there were very keen to hear what we felt worked and didn’t work this year so I strongly suspect that we’ll see continued iterative improvements at NXTWORK2017.

In short, if you’re a Juniper customer but have not been able to attend NXTWORK so far, I’d recommend taking the opportunity to attend next year. NXTWORK2016 was definitely productive and educational. Also, TJ Miller.

I was invited to attend NXTWORK2016 by Juniper Networks, which paid for my travel, accommodation and conference entry. However, there is no agreement or expectation of any publicity by way of blog posts or otherwise, and I am free – if I choose to comment on the event – to say whatever I like without any input or control from Juniper. In other words, I’m writing about this because I choose to, not because I am required to.

Juniper NXTWORK – A New and Better Kind of Conference