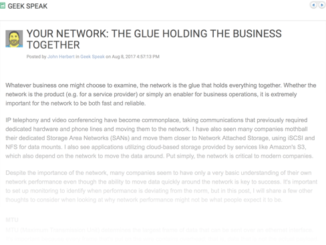 TCP congestion control, buffer bloat and micro bursting are just a few of the things that can ruin your network and, as a consequence, your business. On the Solarwinds Thwack Geek Speak blog I looked at […]

After quite a few discussions resulting from my Epic Evaluation: Ubiquiti ERPro-8 vs Play-Doh where (spoiler alert!) the Play-Doh™ won hands down after an exhaustive six-month test, I’ve been persuaded to give Ubiqiuti Networks (aka […] 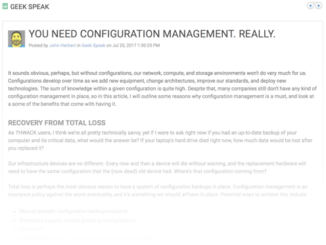 Oops, lost a network device. I sure hope we have a configuration backup… On the Solarwinds Thwack Geek Speak blog I looked at how configuration management can help not just with total loss scenarios, but […] 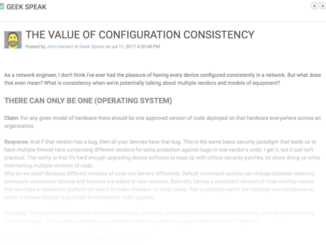 It’s one thing to have a stable network, but it’s another to have consistency in device configurations across the network. Does that even matter? On the Solarwinds Thwack Geek Speak blog I looked at some […]