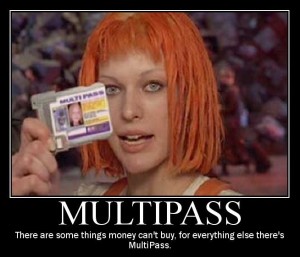 A number of years ago, I visited Telehouse in London’s Docklands. Telehouse, if you don’t already know, is a huge data center colocation facility and, for my purposes, was also the home of LINX, the London Internet Exchange.

Security at Telehouse is pretty tight, with a wide range of alarms, sensors, security staff and similar in place to protect the facility and its contents. Of particular interest to me was the single-occupant man-traps between reception and the ‘inside’ of the building. A door opens, you walk in, the door closes behind you, then the door in front of you opens. The space between the doors is deliberately small in an attempt to ensure that there’s only room for one person. Worse, the floor inside the man trap is also a weighing scale – and if the system believes that there are two people in there based on the weight, you’ll never get through.

Being of somewhat portly stature (wild understatement these days, but only a marginally huge understatement back then), I was thoroughly unamused when I tried to go through the mantrap and each time the door behind me closed, it would re-open a second later, as if to spit me back out like a particularly large, bad tasting piece of food. I tried this a few times for good luck, much to the apparent delight of the security staff who were barely managing to suppress their laughter.

Finally, somewhat optimistically I tried leaving my heavy laptop / tool bag with the guards while I tried to enter without it. No difference. In the end, they had to break several rules (so they claimed) and let me in through the fire exit.

So What Do We Learn From This?

Security mantraps are a form of ritual public humiliation for fat engineers. Helpfully, I’ve yet to find one that displays the weight at which it tips the balance and decides that you are so overweight you are in fact a slim person giving another slim person a piggy back into the man trap, so you are forced to give it at least one go in order to find out exactly how close to heart attack you really are. I suspect the security camera footage of these events ends up on some kind of Security Christmas Tape to be enjoyed by the employees at the end of the year, sped up and repeated so it can be accompanied by the Benny Hill music. Also, and it’s perhaps obvious why, but the security staff at the front desk do not have a “don’t panic, it’s just a walking mound of blubber with a console cable” button that will override the system with a dose of sweaty reality.

I still fear that one day I’ll end up employed by a company that has a mantrap at the staff entrance. Actually, at one point I did work for such a company but thank goodness they had set the weight trigger very high (so high it was basically ineffective) and I was spared the daily embarrassment of having to enter the office on a fork-lift truck via the goods entrance each day. 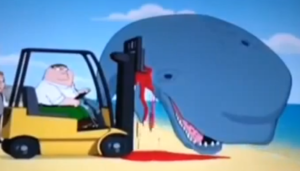 Thank you, Family Guy; that was pretty much how I pictured it.

I’d start a petition claiming that having a weight limit enforced by a mantrap is a form of fat discrimination in the workplace, but that would involve me putting effort into it. And let’s face it, if I could put effort into things, I wouldn’t break the mantrap would I? Onward we roll 😉

2 Comments on The Perils of the Secure Mantrap