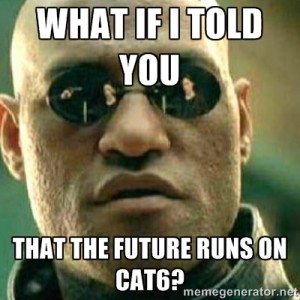 There’s no avoiding the fact that the much-hyped Internet of Things (IoT) is coming. Devices are popping up all over the place offering some form of wireless connectivity so that they can control (or be controlled) remotely, and if you want to run a Smart Building, having control over all the elements of the environment could be a huge benefit. To that end, Cisco is playing with the idea that maybe we can offer power (via PoE), networking (Ethernet) and maybe even save a little money, by using Cat6 Ethernet cabling to connect those devices.

Not everything needs to be hard-wired, for sure. Some devices can be battery powered and may need to be placed in places where any wiring would be undesirable or impossible. Other devices though, may require more than battery power to operate, and that means running power to their location. If the device needs to send or receive a reasonable amount of data, it may also need to run 802.11 wireless, or have a wired connection; the common 802.15.4 Low-Rate Wireless Personal Area Network (LR-WPAN) solution utilized by many connected devices may not provide enough bandwidth to be usable, and in a larger scale building, it just wouldn’t be practical to use a WPAN.

One of Cisco’s presentations at Networking Field Day 11 discussed the Enterprise Switching group’s research into the Smart Building, and suggestion was made to consider how the cost and manageability of some devices might be improved by using Power Over Ethernet (PoE). The example given was a standard ceiling light fitting; it requires that power cabling is run to the light location, and if it’s a smart light fitting it will need some form of networked connectivity too. Cisco’s proposal? If you can create a light fitting that runs on PoE, you only need to run one cable to that location: Ethernet. Running lower voltage cabling in the ceiling void is both cheaper and safer than running high voltage cabling, but how do you make a light fitting bright enough to be usable? The answer is a combination of high power PoE (and let’s face it, the wattage ratings seem to be rising constantly) and an LED light sources.

To that end, Cisco demonstrated a ceiling light powered by PoE from a Cisco 3560-CX series switch, offering an impressive 240w of POE. It’s hard to convey quite how bright the light was, but I can assure you that it was impressively blinding to look at. Here it is, dimmed down a bit, sitting at the back of the room after it had been introduced (and it even comes with a model to show it off, Price Is Right style): 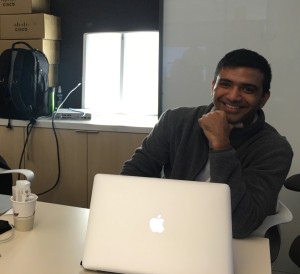 In the home, this may not be quite such a useful concept (although I’d certainly consider it in my basement if the price was right; I have a suspended ceiling there and would love fully controllable lights), but in a commercial environment with the right controller software, this could allow a level of power management not seen before. Each light fixture is now individually addressable, so switching on and off and changing lighting levels can be done on a very granular basis, unlike today’s lighting where one light switch tends to control entire office areas, and additional controls are only given in conference rooms where they have to be added specially. A light switch on the wall doesn’t need to be high voltage either; run a low voltage cable to it and it could either be wired into an IO device for the control system, or it too could use PoE so it can dim the lights, be illuminated, or offer other information or features. Changing what a switch controls would be done in software (on the controller) so the switching is flexible, and it would be pretty cheap and easy to add an additional switch or dimmer at any time in the future; perfect for those frequent office reorganizations that seem to go on. Add some presence sensors into the mix, either embedded / attached to the light fixtures themselves, or direct connected on Ethernet, and lights can be easily turned off when an area is unused.

So that’s lighting, but what else could this apply to? Cisco mentions a few possibilities in their presentation, including access control systems, environmental sensors and digital signage. There is a huge opportunity here to also hook into the building HVAC systems, and start controlling air flows at multiple points to allow zoned heating and cooling and offer local temperature controls (thermostats can also be PoE connected). The obvious question, given that Cisco do not — as far as I know — manufacture ceiling light panels, HVAC systems and building control systems, is What’s in it for Cisco? I get the impression that this is as much a thought exercise and proof of concept for Cisco as it is an attempt to grab market share. Selling more high power PoE switches would of course be a win, but once a high power PoE injector comes along, that will shift to selling switches, and if they’re dumb layer 2 devices, the options are wide open.

I like that Cisco is willing to play around in this area, and by saying so, I’ve probably just offended a whole bunch of people who I’m sure do not view their job as playing around by any means. I apologize if so, because I mean it as a positive thing that investment is being made in proving that the technology can work, and that Cisco can be a part of the solution. It’s hecka fun thinking about what could be done with some Cat6 cable and a PoE switch.

You can watch Cisco’s presentation from NFD11 below:

I was an invited delegate to Network Field Day 11, at which Cisco presented. Sponsors pay to present to NFD delegates, and in turn that money funds my transport, accommodation and nutritional needs while I am there. That said, I don’t get paid anything to be there, and I’m under no obligation to write so much as a single tweet about any of the presenting companies, let alone write anything nice about them. If I have written about a sponsoring company, you can rest assured that I’m saying what I want to say and I’m writing it because I want to, not because I have to.

Dell EMC and The Amazing Internet Of Things

Unifi US-8 PoE Passthrough With The Cisco 3560CX