I first posted about the Linksys E2500 back in November 2011. At the time, I had a number of issues with this dual band wireless router, but I also acknowledged that I was running it in a slightly unusual way (bridge mode) which meant that many of the features simply didn’t work. They should work, of course, but they didn’t and that’s just life.

So now I am some 18 months on, I have three Linksys E2500 routers running on my home network, and I thought I should provide an update on how they are doing.

A a reminder, the Linksys E2500 (I can’t bring myself to put the word Cisco in front of it any more) is a dual band 802.11 b/g/n router. There is no ability to add an external antenna, and no command line acceess – it’s the Web UI or nothin’. It’s definitely aimed at the home market, and not at geeks. Still, the price was right and I picked mine up as refurbished units.

I have three Linksys E2500 routers deployed, all in bridged mode, so I’m really not using the routing capabilities of the device at all. I have an AP on each floor of my home – basement, first and second floors. In my home network, things look roughly like this: 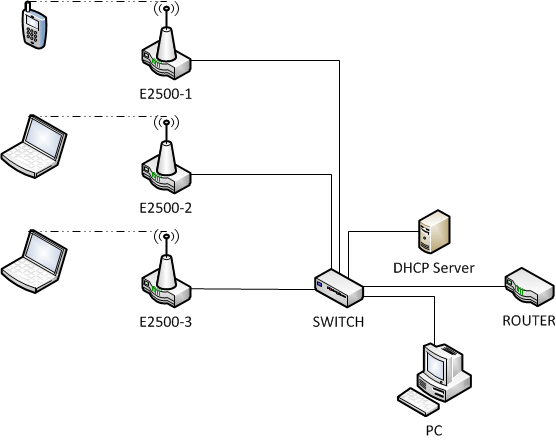 Since the APs are bridging, all devices on the network are on the same subnet (with DHCP served centrally). The three APs are all configured with the same SSID, running on separate channels, and roaming is pretty much seamless. Effectively the E2500 is nothing more than a wireless-to-wired bridge – which is all I need them to be.

The wireless coverage and performance has been pretty reasonable – I’ve had no issues with spotty coverage, and in fact I’ve still got WiFi signal showing on my cell phone when I walk up the road a bit.

I’m running the latest firmware (1.0.0.7) and I will comment that installing the later APs I bought (with newer firmware and Cisco Connect software) was marginally less painful than the first one I used, so there was some improvement there at least. I didn’t find myself cursing Cisco anywhere near as much as before.

Thinking of enabling HTTPS for management of these APs? Don’t do it. In my original review I complained about the hideously bad and unresponsive web UI. After some further troubleshooting while installing the third AP, I finally realized that the performance using HTTP was quite reasonable – not great mind you, just reasonable. Connecting using SSL triggered the treacle switch, and I was throwing things at the computer screen once more. I can’t imagine how desperately underpowered the CPU must be (or how bug-ridden / badly written the code must be) to create this kind of performance issue, but there’s clearly a bad problem here. I haven’t tested HTTPS other than while running bridged mode, so I can’t tell you if this is just a problem in my environment.

Without question, the lack of long term stability is the single most irritating thing that I have found about the Linksys E2500. Periodically one of the devices will stop responding – and unfortunately also stops passing traffic. If it dropped the wireless association I wouldn’t mind quite so much, but it seems that it keeps the WiFi clients happy enough to stay connected even though they can’t get to anything.

It’s easy to diagnose which E2500 has crashed, because it won’t respond to pings or HTTP. I’d tell you what it was complaining about based on its logs, but since I can’t connect to the hung device, and since logging for some inexplicable reason cannot be enabled when in bridged mode, I have nothing to go on. All I know is that at worst, I’ve had APs hanging 3 times in a day. Other times, they’ll run for weeks without a problem.

This is now enough of a pain that I have written a script that runs every minute to ping the three APs, and if any of them fails to respond I will get an SMS and an email telling me which AP(s) is down. I should not have to implement this level of monitoring on a home user device, should I? I wish I knew what was causing the crashes – maybe it’s some kind of malformed packet, but really I have no idea. If I ever find out, I’ll be sure and let you know.

Apart from the stability, the Linksys E2500 isn’t all bad. It has a number of flaws, sure, but the wireless side seems pretty decent. However, at this point I cannot recommend an AP that randomly hangs – that’s just not acceptable. Unless of course you can pick them up really really cheap and you don’t mind pulling power cables every now and again!