In this final part of my CCIE Story, I thought I’d take a look at what the CCIE has meant to me, some of the things I’ve learned along the way, and some thoughts on the process as a whole.

If you didn’t already read the rest of the story, then shame on you for jumping to the end! I recommend you start here 🙂

My CCIE Story – A Success! But what if…

One of the questions that was on my mind after I took the lab in Brussels was “what if I had failed?” Would I have gone back and tried again? Could I have gone back and tried again? For the longest time, I didn’t know. When I was preparing for the lab exam, it was intense to say the least; I was working long hours days for weeks on end in order to try and get myself to a peak sufficient to pass the lab. For a long time, I was not entirely sure that I could put in that level of effort again – it certainly felt like I was spending all my study effort in one go, that’s for sure.

My study colleague who took the exam a week before me was not so fortunate as I – he did not pass – and as far as I can recall, he did not go back and take it again. And I understand that. The lab itself was so incredibly stressful, it’s hard to imagine willingly choosing to put myself through that again. I have a lot of respect for the folks who are able to pick themselves up after the disappointment of failing the CCIE Lab exam, get right back to it and book another date. Kudos to you if you have done that, because it speaks highly of your level of motivation and the effort you’re willing to put in for your goals. For a while I was convinced that I could not have gone back again, but I realized eventually that I could not have let myself throw away so many hours of hard work.

So for what it’s worth, if you take the Lab and don’t pass, I’d say try and stay focused and go back while it’s all still fresh. It takes so much effort to even get to the stage where you are attempting the Lab, to walk away from it and not try again would be an awful waste.

I was pretty lucky that when I took my lab, I had a supportive manager and company (they paid for the lab, they paid travel expenses, and they gave me some study time). They also allowed me and my study partner to rip apart two existing labs’ worth of equipment, and take them offline for a few weeks so that we could build custom practice CCIE lab topologies. That’s pretty cool.

I also had a wonderfully supportive and encouraging wife, who stayed positive, helped keep me focused, threw food at me at appropriate times, and – perhaps most importantly – tolerated the fact that I was out of the house for much of the day, seven days a week for four weeks, then out of the country for a few more days taking the Lab exam. All the while she took the brunt of dealing with our five month old baby. I could not have passed the CCIE exam without her love and support.

I worked with a lab study partner. This actually turned out to be a really good thing – we could bounce questions off one another, and for each lab topology I built, he built one too, so once we were completed we cleared the configs and swapped lab topologies. Since wiring up a lab is time consuming, that meant I got twice as many lab topologies built than I might have done on my own. We were able to encourage each other when things didn’t go well, and share in each other’s triumphs too. I was very sad when he failed the lab in early 2001, but his loss – selfishly – was perhaps my gain, because he shared one very important tip with me, that I will share with you below. Meanwhile, I strongly recommend working with a peer study partner.

My study partner did not fail because he wasn’t good enough – he absolutely was – but because, by his own admission, his time management let him down. The two day lab – and I’m sure the same applies to the current one day lab – is intense. Sure, you have some level of access to CCO documentation, but here’s the thing – you don’t have an awful lot of time to use it. It’s kind of a trick – you have what is effectively an Open Book Exam, right? But there are so many questions on the exam, you’d better know 95% of it off the top of your head because 5% is probably about all you’ll have time to look up. And even then, you’d better be able to flip to the right page pretty quickly. We actually practiced looking things up in the documentation so that we would be able to find the right syntax guides as quickly as possible.

So my study partner’s mistake was that during the afternoon on Day 1, he got caught on one of those high point-value questions that followed up an easy but tedious low point-value question. His mistake was that instead of just putting something in to make the lab work so that he could continue to the next question (and more points), he tried to look it up. He couldn’t find the right solution, and he kept looking. He followed link after link in the hopes of finding the right gem of information that would give him the answer. Before he knew it, 45 minutes had gone by, and the end of the exam was fast approaching, and he had left a whole load of unanswered points on the table. He tried to catch up, but it was too late – he wasn’t able to make back that 45 minutes, and he was sent home at the end of Day 1. I can only thank him for the tip not to get caught up diving down a rabbit hole, and letting time get away from you, but to make sure you stepped back and check in on the big picture as often as possible.

I guess you could summarize this tip as being to invest a level of effort that is proportional to the end reward, and realize that losing 3 points is better than losing the next 15.

I suspect most of you know of Mavis Beacon, Typing Tutor. It is software that helps you learn how to touch type. I mention this because – and it might sound obvious – when you have an awful lot of things to type, it’s one thing to know what they are in your head, but it’s entirely another to get those words (commands in this case) through your hands and into a router. Most of the network geeks I know and love have brains that move at lightning speed. I can’t imagine not being able to translate those thoughts into typing quickly enough to keep up. My feeling is that the slower you type the more frustrated you are going to be.

Maybe that guy types a little too fast, if that’s possible. However, my point stands: if you hunt and peck, I believe the CCIE Lab is going to be a huge ball of stress for you. Maybe proper touch typing isn’t necessary (I don’t touch type properly), but being able to type fairly quickly and accurately will allow you get tasks completed faster, and give you more time to spend on the trickier questions. Every second wasted adds up and might come back to bite you at the end of the lab!

Does this kind of positive self-affirmation work? I have no idea, but I can’t imagine it does any harm. And if you feel a little happier about things even for a minute, it was positive, right?

If you are a guy, it is critical to shave on the morning of your exam. (Ladies should probably consider this optional).

Ok, let me explain this absurd bit of advice. When I was in my last year in school, I had a conversation about my upcoming A-Level exams with (Mr) Charles Tracy, my home room teacher. He was also my Physics teacher, and a fun guy to play music with; from memory it was he who sold me his Korg 770 analog synth (sadly long since sold on, but wonderful fun to play with at the time). I think this is him now, working for the Institute Of Physics. I say ‘think’ as you have to bear in mind I haven’t seen him in 21 years, so this could just be some other Physics guy with the same name. I hope not: 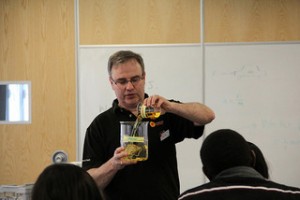 As you can probably tell, I liked him – he was a good guy. We had a quick chat about the exams, and he wished me good luck. As I had my hand on the door handle on my way out he called my name, and said “And don’t forget to shave on the morning of your exams!“. Ok, I know teenage stubble isn’t attractive, but… what? He then proceeded to explain that when he had taken his O-Levels, he had shaved in the morning for every exam except one: Music. And the only exam where he did not get an A was Music (he got a C). His conclusion therefore was that shaving on the day of your exam was a statistically significant causal link to a good exam result. I know it sounds stupid; it really does. But once you’ve been told that, and given that shaving does no harm, it’s hard not to follow the advice. And so I did. And I have done so, annoyingly, for pretty much every exam I have taken since then, including all the networking certs (e.g. CCNA, JNCIA-JUNOS, CCNP, CCIE, etc.). It’s odd, because I’m not particularly superstitious – but that one has stuck with me, almost as a joke. My wife even checks before I leave for an exam – “Did you shave this morning?”

Mr Tracy, if you ever end up reading this, firstly, thank you for being a cool guy, an encouraging musician, and a good teacher. I also sincerely hope that you are laughing your ass off at what you have done to me, and I hope that over the years you have shared that particular curse with other people too, just as I am doing here. 🙂

Thoughts on Having the CCIE Certification

I’ll share some deeper thoughts on the value of the CCIE in a future post – this one is getting way too long (yet again). It’s a great cert though, and it’s a big journey to get there.

I hope you enjoyed – or perhaps got some value – from reading my CCIE story.

3 Comments on My CCIE Story – Part 5 (The Aftermath)